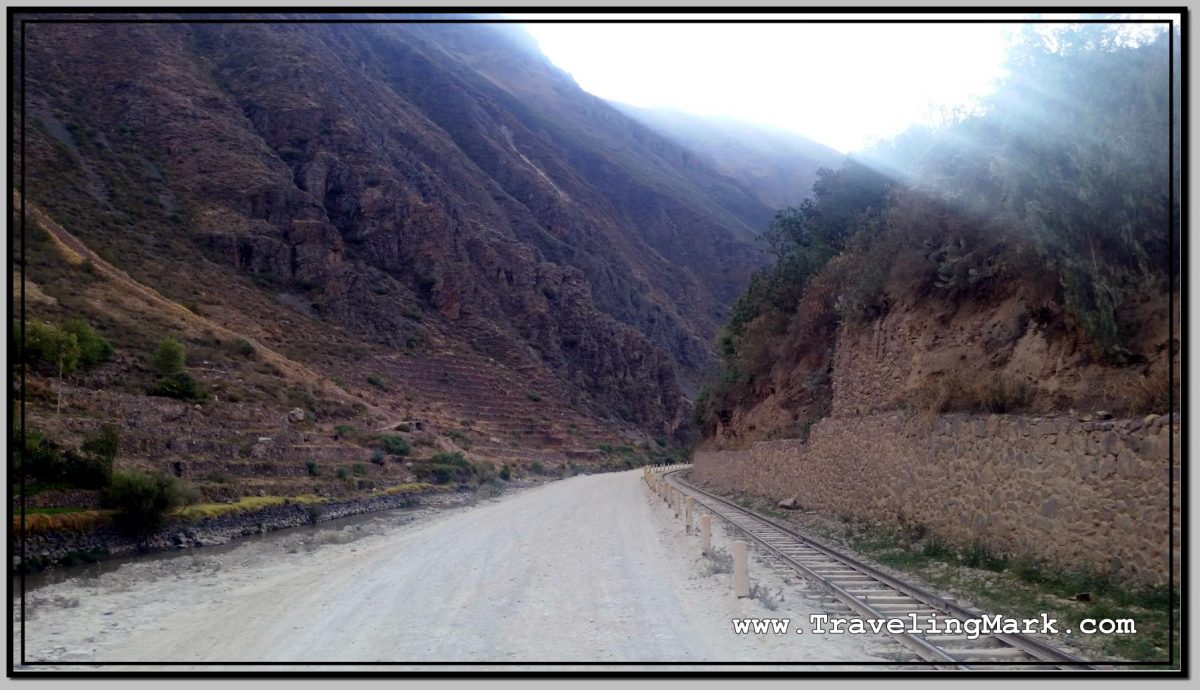 Having arrived from Cusco, gotten a room, explored the ruins on the Pinkuylluna Mountain, and filled my belly with fried trout, I felt like I’ve seized the day pretty well, but whereas I still had an hour until the sunset, I decide to get off the beaten path in Ollantaytambo and explored its least visited areas.

I found out while messing around the town’s main square of Plaza de Armas that just outside of the town boundaries on Ollantaytambo’s south-east side, can be encountered the ruins of an ancient Inca bridge, and that near said bridge lay also the ruins of an Inca pyramid. I hit it off to check those out.

Getting to the Inca Bridge

I started the walk from the south-eastern corner of Plaza de Armas and followed the road due east, passing the small market with incredibly overpriced fruits (Peru is expensive to begin with, but it’s even worse as you get closer to Machu Picchu – Ollantaytambo was second only to Aguas Calientes, which is at the foot of Machu Picchu), and onward down the road, until I reached a T intersection. There I turned left and after a few meters immediately right to carry on due east.

On that road I passed Inka Paradise hotel and some kind of a school, after which there was a narrow pedestrian dirt road through a field. That road leads to the bridge. Except at the end of it, there’s a cliff that needs to be descended so if you didn’t take the stroll in your hiking boots, you will only get to enjoy the bird’s eye view of the bridge, and no pyramid.

An alternative is to go around town by following the road back to Cusco, but that road is narrow with no sidewalks to safely walk on and the drivers don’t pay much respect to pedestrians.

There isn’t a whole lot left of the ancient Inca Bridge. Just the support column erected in the middle of the Vilcanota river still holds the original stones used for its constructions. Nowadays, a newly built suspension bridge connects that banks of the river, still utilizing the remnants of the old Inca structure.

Along the Ollantaytambo side of the river there are railway tracks leading to Aguas Calientes, but no road so tourists don’t have the means to get themselves near Machu Picchu, and are stuck having to use the train for which they are charged more than 100 times the cost of the locals. It is a major and blatantly deliberate rip off which I refused to support.

While I was at the bridge, a train with ripped off tourists returning from Machu Picchu back into Cusco passed bay.

On the other side of the tracks from the bridge is the pyramid. It is a cascading stone structure build into the slope. I didn’t come across any reasonable kind of backinfo about the pyramid, except that it’s there, near the bridge next to the tracks.

Te pyramid had a set of protruding stones built into the outer wall, to serve as steps for ascend. Despite dodgy looking purpose, those steps are solid and absolutely safe to walk on, having withstood the test of time – centuries after being built, they are still there in their original form after affording countless people the way up on the pyramid.

Because the way I came to the area involved a descend down a very steep cliff including a near 2 meter jump, going the same way back was not an option, so I walked around town down the paved road from Cusco.

The vast majority of people who come to Ollantaytambo will only visit the fortress – having shelled out some $43 for the entrance to the archeological sites within the Sacred Valley of the Incas. They come on buses as part of organized tours which only take them to the fortress and nowhere else. So whereas the fortress is overrun with hundreds of tourists every single day, the nearby Pinkuylluna Mountain, which is free to visit receives very few visitors, but when it comes to the Inca Bridge and the Pyramid on the opposite side of the river, your chances of spotting another tourist around them are next to none. 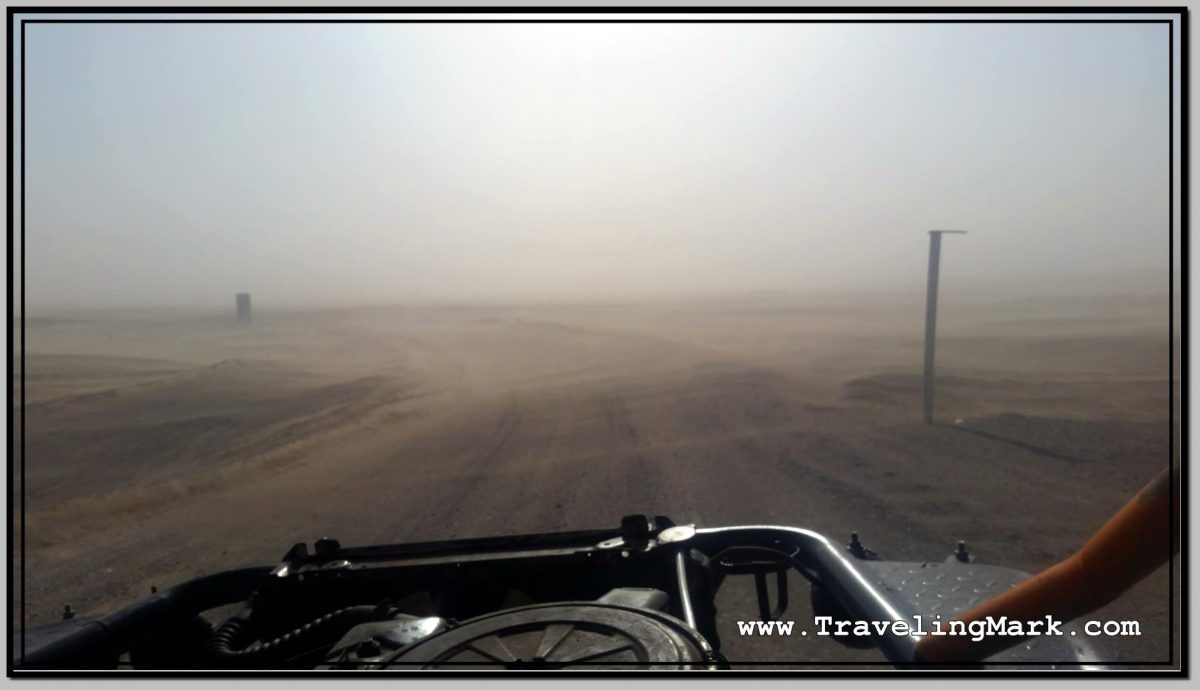 Unless you visit Nazca or its surroundings between January and March, the weather you will encounter will be sunny and hot, with no clouds to obscure the sun during the day, but bone chilling cold at night.

You can tell by the entire surroundings that this place is baked by the unobstructed sun a lot, and by just visiting outside of the brief rainy season, it’ll all make sense why. Nazca is for all intents and purposes a desert with everything that makes a place a desert.

At 2pm when the Edunas tour was scheduled to start it was an unbearably frying day. At 3 something pm when it factually started, the day was still unbearably frying. Taking a bit of an air in an open “buggy” during the ride to and from the aqueducts was a welcome refresher. But things quickly changed after we started the passage across the vast desert field separating Nazca from the Adobe Pyramids at Cahuachi – ceremonial center of the Nazca culture.

A few minutes into the ride, we were hit by a savage sand storm. The wind came out of nowhere and hit us with so much force, every single one of us had sand in every single orifice and pore. Our driver told us he’s been doing these tours for years, but has never experienced anything like that before. He however encouraged us by saying that the storm will likely pass in maybe 10 or 20 minutes and everything will go back to normal. That actually never happened.

We arrived at the Pyramid, where we were getting relentlessly hammered by the wind so strong we could barely hold our footing. A guide was trying to tell us the history of the pyramid, but no one could hear a word of what he was saying, plus standing in this wind that relentlessly blows sand into you and shows you not a bit of mercy was no fun at all. I remember catching something about only 5% of the entirety of the complex having been uncovered so far. Yet the uncovered part was already expansive.

Being an active archeological site, the visitor walkways were marked with white stones and signs everywhere reminded us all to not wander off marked walkways. Meanwhile, the storm kept pounding the living crap out of us, and whereas our vehicle was an open “buggy“, we had absolutely nowhere to hide from it.

The road to the pyramid consisted of about 20 kilometers of an unpaved desert crossing. The storm encompassed the entire desert, so we were within it during the entire crossing, the visit to the pyramid and basically the entire time henceforth.

All those scenes you see in movies about people layng on the ground and covering up with specialty blankets to wait sand storms out, before they emerge from two feet of sand on top of them – that’s what we should have done, but instead kept going.

You could not keep your eyes open because sand was getting blown into them. Your regular shades are worthless during a sand storm. No matter how tightly you kept your lips together, you could always taste the crunch on your mouth as sand got in there anyway. When I reached into my ear to clean off the collected sand from the ear canal, I was surprised by the thick layer that accumulated in there in minutes. The clothes – I stopped worrying about those very quickly. I could feel sand between my toes as it snuck its way through my hiking boots into the thick sheep wool socks.

It was simply brutal and I got to say I got more than I bargained for from the tour. How awesome is that? Sure I got the absolute living crap beat out of me, but the whole time I was thinking to myself – holy s%$t, I’m riding a massive sand storm in Nazca, Peru.

Money could not buy that experience. I’m in the real desert and the desert sure lets me know she’s indeed real. No joke, this was some serious sand storm and we spent hours in it without any protection, including an hour after dark, when the temperature dropped to near freezing. Talk about adventure in every sense of the word. This I will surely never forget. I’m not even sure the word “relentless” does it justice.

Check out the video that provides a better perspective of what the storm was like. We stopped because we thought the storm would pass. It didn’t. So we rode through it. It would not have been easy getting that on camera: 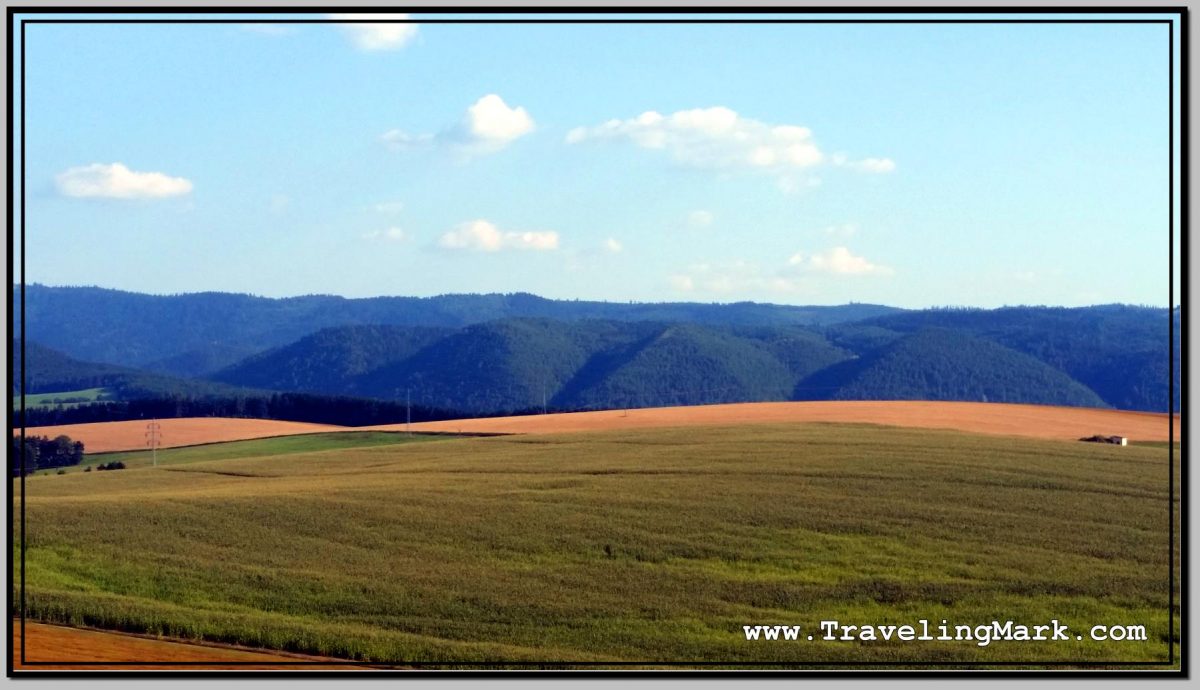 At 8:35am on August 27, 2018, I boarded a plane bound for Lima in Peru, with stops in Prague, Barcelona and Madrid. The 30 hour journey is being as tiring as expected, especially its 12 hours long last leg.

The departure marked the end of my 4 months long stay in Slovakia, the country smack in the middle of Europe. The arguably short, but rich in experiences stay changed me forever.

Slovakia, in many ways, changed how I view and understand life, the universe, relationships and many aspects of life. It was profoundly deep, and introduced me to the spiritual part of myself I never knew existed. The people I met in Slovakia were some of the most aware of all the world, nevermind the fact that the girls are some of the most beautiful too.

Perhaps the highlight of my experience was the visit to a pyramid in Eastern Slovakia, with a mining shaft within which there is the highest density of healing negative ions per cubic centimeter in the world.

But it was indeed my second time in the pyramid, when I met one of its original discoverers, that opened up my eyes to the deeper meanings of life, and set me off on the journey to self discovery that was to trample everything I’ve known before.

And now I find myself counting miles on my way toward Peru, fully aware that this time it’s different. I’m still the same round the world traveler. Still a permanent nomad. But this time the journey is far less about discovering new places and far more about discovering myself. The priority will be my physical and mental growth and wellbeing, with destinations as well as lengths of stay chosen according to how well they can assist in the goals.

Thank you for everything, Slovakia. Peru, here I come!