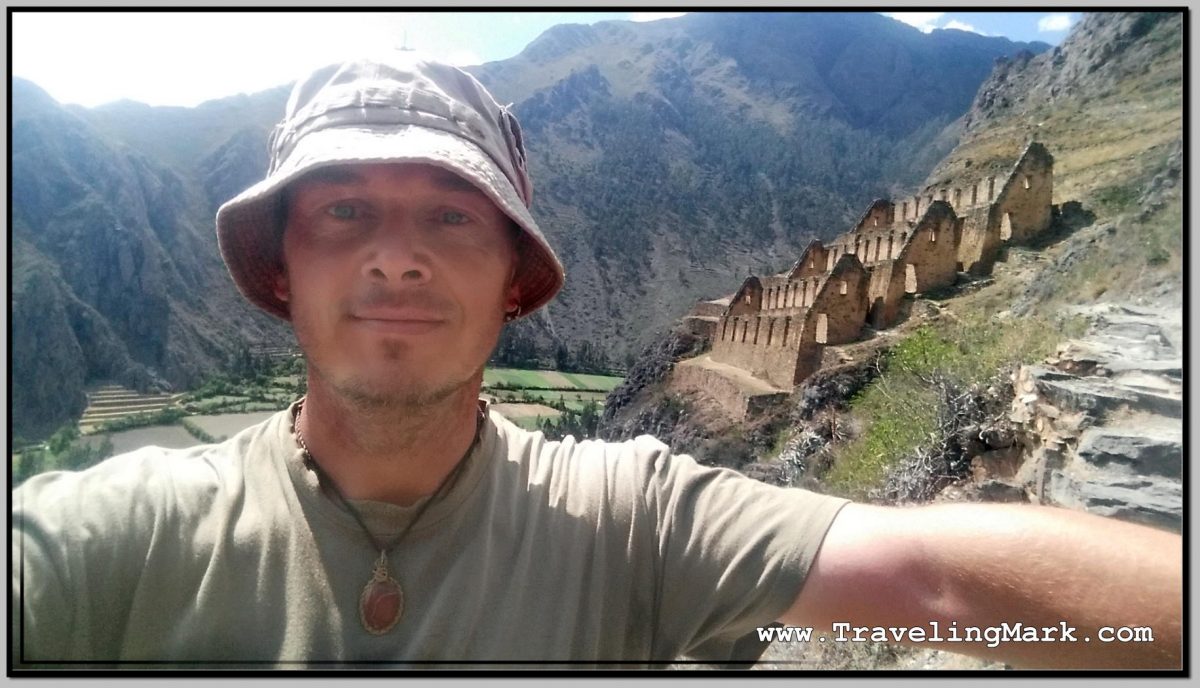 While Ruins of Ollantaytambo are the main archeological attraction in the town of Ollantaytambo, I left them out of my itinerary, as I did many other major archeological sites in and around Cusco, because the entrance fee to those is 140 Soles ($42 US). I simply refuse to support the rip off practices of this magnitude, unless it’s something I could not, for the life of me, afford to miss out on.

Good thing about Ollantaytambo is that on the opposite side of the town from the main archeological site, is steeply towering Pinkuylluna Mountain, on which there are multiple smaller ruins of Inca storehouses and access to those is entirely free. The only challenge is that one must climb on foot the steel slopes of Pinkuylluna Hill in order to access them. But that’s an adventure in its own right that would be worth while even if there were no ruins on Pinkuylluna. Hell yes I was up for it.

And I wasted no time. As soon as I checked in the Inka Wasi Hostal, I put on Shea Butter which I use as purely natural sun screen, and headed out to hit the slopes.

One quickly observable feature of the Pinkuylluna Mountain is the Profile of the Inca (Perfil del Inca). Said to represent the face of Viracocha – the supreme god of the Incas, the father of all other Inca gods and the creator of the earth.

I was told by a local that the face on the side of the mountain is not an orographic whim, but it was sculpted in the rock, and it fulfills an astronomical function related to the seasons – the cultivation cycles – illuminating itself in the solstices in a certain way.

The steep rock steps begin right on the other side of the gate. On the left side of the gate there is a sign informing you that you are at the entrance to the Pinkuylluna Mountain.

The trail up the Pinkuylluna Mountain will get your heart pumping right off the bat. Climbing the hill is basically one major cardio exercise, so by taking the hill on, you’ll get the combination of good heart workout, the best views of the town as well as the main ruins, and the ability to get up close and personal with the storehouse ruins without shelling out a dime.

There were moments during my climb when the gusts of wind were super strong, so not only did I have to hold on to my hat, I had to carefully watch my footing on the narrow rocky trail with deep abyss on its side. If you’re a thrill seeker, you’re gonna love walking the cliff edges of the hill.

The Pinkuylluna storehouses, or mountain granaries, are rectangular structures perched on various parts of the Pinkuylluna Mountain.

Although the placement of these warehouses on top of the hill may seems strange, the fact that at that height the air is cooler and it moves faster, would help in preserving the food and keeping it ventilated. I also tend to doubt the exhausting hike needed in order to reach the storehouses would attract many would be thieves.

Overall, even though challenging, I found the hike up the Pinkuylluna Mountain, and the exploring the storehouses to be a rewarding experience that was totally worth the effort.

Moreover, with the amazing views of the main Inca fortress, I was happy to be on the hill where there were hardly any other people around, and not within the overcrowded main ruins overrun with thousands of tourists.

If you continue all the way to the top, the ever fainter trail will take you around the hill where you will find a small cave. Few people, including locals, even know about the cave.

If you’re easily spooked, or suffer from vertigo, a climb up the Pinkuylluna Mountain may be hazardous, but in every other case I would certainly recommend it as an alternative to the overpriced and overcrowded main ruins of Ollantaytambo.

Here’s a video of bits and pieces I filmed while hiking the Pinkuylluna Mountain. At times the wind gusts were extremely strong: