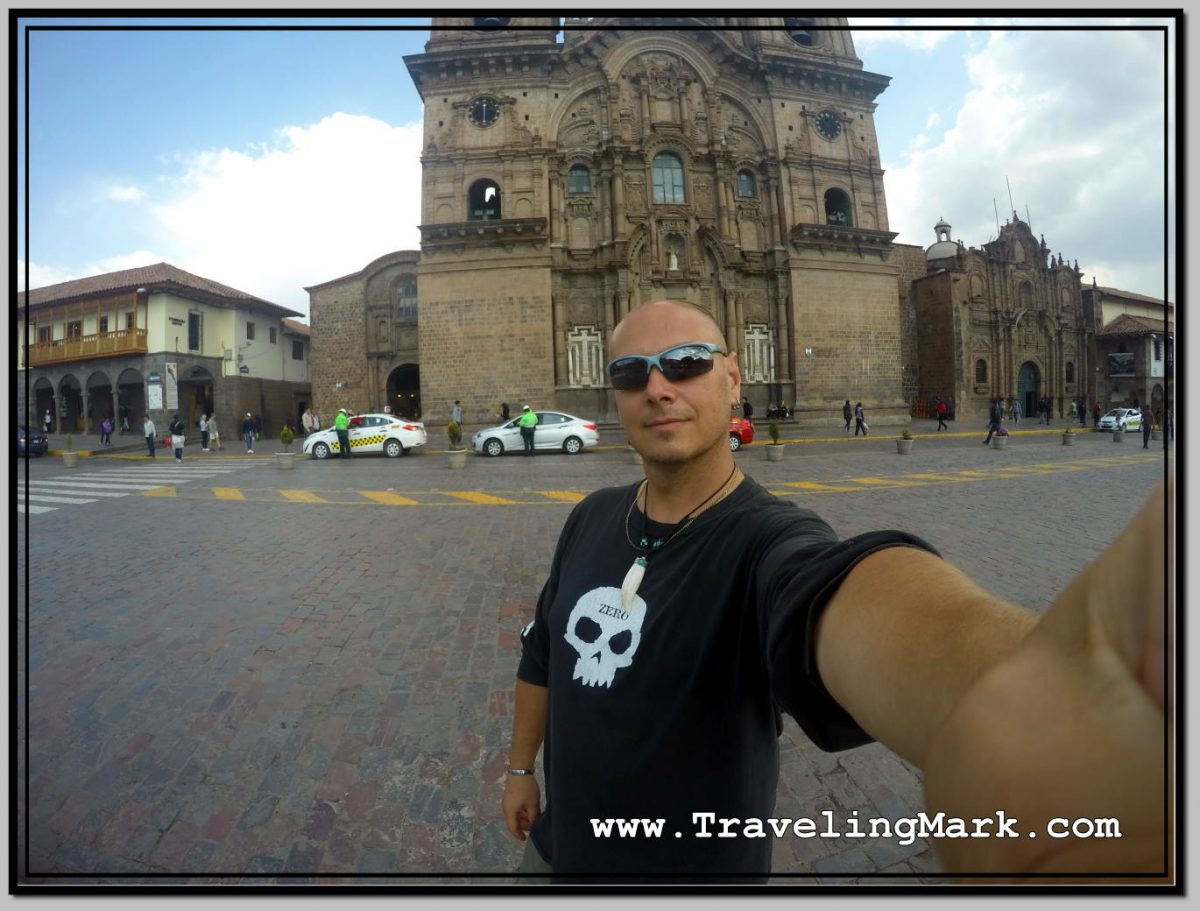 After settling at Margarita Hostel on Avenida El Sol in Cusco, I went out to explore the city. Cusco is the most popular city in Peru as far as the number of tourists is involved, and notwithstanding the proximity to Machu Picchu, after a short period of time touring the city alone on foot, I was amazed by the fusion of the Andean and Spanish cultures in the middle of beautiful landscapes, with the abundance of historical buildings often built on bases and walls of ancient palaces and temples of the Inca Empire that seemed to be greeting me after every corner I took.

This is not surprising, as Cusco was the hegemonic center and the capital of the Inca Empire (locally known as Tahuantinsuyo), and the most important urban center of ancient Peru at the time.

The city, founded by the Inca Manco Cápac, was made up of large palaces, temples and courthouses, with streets and squares, surrounded by extensive areas for agriculture, crafts and pre-industrial production, reaching its greatest development during the reign of the Inca Pachacutec in the fifteenth century.

When the Spanish conquered the Inca Empire in 1534, they founded and built the Spanish city on Inca enclosures and buildings, which can still be seen.

Despite the passage of time, Cusco remains an attractive city for tourism and maintains a remarkable monumental ensemble and the coherence of its urban layout; its streets interspersed with the same magnetism, colonial constructions and Inca walls, churches and pagan temples, archaeological sites and rural haciendas.

Located in the Peruvian Andes at 3,400 meters above the sea level, which albeit being a few hundred meters below that of Puno, Cuzco is still at a high enough elevation to warrant caution and take the possibility of altitude sickness seriously. I felt partially acclimatized, having lived a week in Arequipa and three days in Puno.

Still, as I walked the sloped streets of Cusco, I was continuously reminded by the shortness of breath that the elevation I’m in is high and I need to be at minimum aware of it, if not taking active steps to alleviate its effects. Luckily, the occasional shortness of breath was the only effect of high altitude I have experienced, with other common symptoms, like the headache, overproduction of phlegm in the throat and nose, or even fever like symptoms completely avoiding me.

The Historical Center of Cusco has been continuously inhabited since before 1,400. A royal cedula of July 1540 refers to Cusco as “the very distinguished, very remarkable, loyal and very faithful City of Cusco, the main city and head of the kingdoms of Peru“.

From the records by some chroniclers, and from the latest satellite images, it is known that the first urban layout of the city had the shape of a puma.

The narrow cobbled streets, churches, old neighborhoods and colonial houses, as well as several archaeological monuments, are a sample of a mestizo culture that has survived time, invasions and natural disasters, and remains alive despite the passage of the centuries.

The Historic Center of Cusco, despite many historical events and natural disasters which occurred, is in an amazing state of preservation; and thanks to that, the City of Cusco was declared Cultural Patrimony of the Nation in 1983; the same year it would be declared a Cultural Heritage of Humanity by UNESCO.

With Cuzco being as popular as it is with tourists, and with Avenida El Sol connecting directly to Plaza de Armas, it is expectedly replete with various travel agencies looking to score tourists’ dollars for themselves. The good thing about that is that they are a bountiful source of maps of Cuzco for those who don’t have MAPS.ME open source maps app on their smartphones.

As a backup, I always have the off-line map of the country I’m in downloaded on my phone, but where there is an opportunity to pickup a printout of a map, I do so, so as not to drain the phone’s battery by constantly looking at its screen.

Seeing as Plaza de Armas is just a short walk up Avenida El Sol from where my hostel was, I took the walk to snap a few pictures of the downtown square. The moment I reached Plaza de Armas, I was jumped by a swarm of women offering me massage services.

I was quoted prices around 50 Soles per hour, which albeit touted as a great price, is indeed no so great for anyone who’s had a massage in Asia.

At the time of my visit, 50 Soles equaled a little more than $15 US. You can get a 1 hour full body Thai massage for $5 in Thailand, 1 hour of full body Khmer massage for $4 in Cambodia, or 1 hour of full body general massage for $3 in the Philippines, and if that’s also your thing (such as it is mine), Asian girls are fit and attractive, whereas Peruvian women are overweight and generally lack in the overall corporal attraction level quite a bit.

So for me, getting an hour long massage for $15 US from a woman who’s at best a 3 or 4 was a no go. I’ll save getting massages for where they cost $5 or less and are given by girls who are a solid 8 or 9. I flirted with some of the girls offering massages in Cusco, but never ended up getting one.

I started my tour of downtown Cusco by visiting El Convento de Santo Domingo, because it was located directly on the opposite side of Avenida El Sol from Hostal Margarita. The convent of Santo Domingo is built on the foundations of the Qoricancha (Temple of the Sun).

Cusco’s main square Plaza de Armas occupies the same place as the Plaza Huacaypata (Quechua for voice, moan or lament) that was drawn by Manco Cápac when he founded the city of Cusco in the 12th century. It was the place where the Inti Raymi – a religious ceremony in honor of the Son god – was celebrated in the time of the Incas.

From the arrival of the Spaniards it was somewhat diminished in its dimensions by the perimetric constructions, which adorn the square to this day, like the Cathedral, the Church of the Company, the portals, arcades and large houses. Today, the houses surrounding Plaza de Armas are homes to jewelers, travel agencies, tourist restaurants, massage parlors and other establishments catering primarily to foreigners. Strangely, there is no McDonald’s, KFC, Starbacks or the such at Cusco’s Plaza de Armas.

Jose Gabriel Condorcanqui Noguera, better known as Tupac Amaru II, the leader of a large Andean uprising against the Spanish, was executed at Plaza de Armas on May 18, 1781.

The Cathedral of Cusco is a catholic temple built on what was the royal palace of the Inca Viracocha (Huiracocha). It was built with blocks extracted from an Inca site very close to Sacsayhuaman. Construction began in 1559 and was completed almost a century later.

Church of the Company of Jesus

Iglesia de La Compañía de Jesús is a colonial Jesuit Temple, built on the Royal Amarucancha Palace of Huayna Cápac in 1,571. It is said to be surrounded by labyrinths and secret passages, in which Notable characters of the conquest and Spanish colony were buried.

The Convent of La Merced

In the basements of the church are said to rest the remains of the Spanish conquistadors Diego de Almagro, Almagro El Mozo, and Gonzalo Pizarro.

From Plaza de Armas I walked on to Plaza de San Francisco, and from there along Calle Santa Clara to San Pedro market. The vendors sell fruits, dried nuts, health care products, and other items commonly found at markets in South America, though being so centrally located in Cuzco, the great part of the market was dedicated to selling overpriced handicrafts to unaware tourists.

As a matter of fact, pretty much everything was heavily overpriced in the market. Fruit availability was decent, but the prices excessive. However one stall, which sold dried fruits and nuts was worth it for me due to the availability of Brazil Nuts, Almonds and dried Figs. The prices weren’t the greatest, but I was more happy with the ability to buy healthy, non-perishables than anything else, so I adequately resupplied.

Opposite San Pedro market is Orion supermarket, where local mineral water in 2 liter bottles was sold for only 2.40 Soles. That was a great price in the country where a 2 liter bottle of ozone treated tap water normally costs 5 Soles (yes, Peru is expensive). So in spite of being generally pricey, this quality mineral water, which was also highly alkaline (PH 8.5) was available in Cuzco at a better price than treated tap water without any nutritious value in the rest of the country.

Overall, my introduction to Cuzco was OK. I got the feel of the city, got to know its vibe, got myself oriented in it pretty well, got to know where to find reasonably priced accommodation and where to purchase essentials for survival. But my initial trip to Cusco was not meant to last.

Upon my early morning arrival in Cuzco, I took advantage of a temporary promotion for return trips to Lima by the bus company Civa, who sold the return tickets for 90 Soles. Having chatted on the internet since arriving in Peru with a girl from Lima, and having arranged an opportunity to rent a room in an apartment owned by a Spanish woman living in Peru for 50 Soles a night, I combined all three to spend a weekend in Lima and return to Cuzco afterward to begin my trips to the sites of interest during weekdays, and not during overcrowded weekends.

There was more to explore in downtown Cusco, but I chose to return to the room in Margarita Hostel to spend the night, after which I was scheduled to take the 22 hours long bus ride back to Lima.