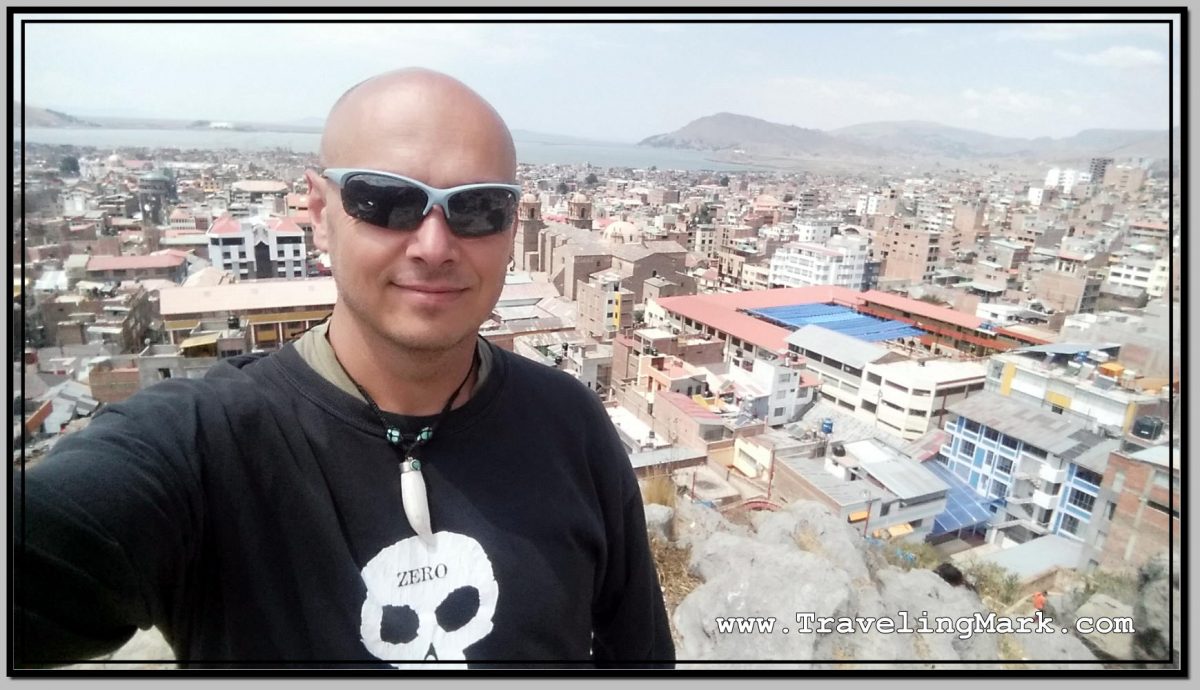 Having checked in late at night, once I woke up from the cold night at El Lago Hostel, I went out into the sun filled streets of Puno to unfreeze my bones from the shivers dominated night. The first goal was to find a different hostel to move to, as El Lago simply did not provide reasonable value for the price, and the incessant, night-long screaming made any chance of a restful stay an impossibility.

I moved to Hotel Inka Tours. Not only was the price for the hotel 35 Soles, ie less than at El Lago Hostel, the room was much nicer, the bed more comfortable, the bathroom cleaner, the internet worked and the staff did not make the common area of the hotel a party place for the night.

With the new room for the upcoming night secured, I moved my things over and headed out to the streets of Puno to battle the city’s high altitude on foot.

Plaza de Armas (every city in Peru appears to have a downtown square called Plaza de Armas), was over 2km from the bus terminal near where I was staying, so it took a bit of a nice walk through the city to get there and snap a few pictures of the cathedral and the nearby buildings.

On the upper side of Plaza de Armas proudly stands the Cathedral of Puno, also known as the Basilica of San Carlos Borromeo. The baroque cathedral is the main church in the city of Puno. It is under the ownership of the Catholic Church, and was declared a Cultural Historical Heritage of the Nation of Peru in 1972.

The cathedral is made entirely of stone. The idea for a cathedral of stone reportedly arose from a miner from the area called Miguel de San Román. Indigenous master Simon de Asto was put in charge of building the cathedral – a construction that ended on May 25, 1747.

From Plaza de Armas, I headed up on the nearby hill on top of which I saw a statue. The unobstructed views from the hill promised opportunities for pictures of Lake Titicaca and the city of Puno itself.

Even though reasonably fit for long walks, ascending the 60 meters high rocky outcrop known as Cerrito Huajsapata in the altitude close to 4 km (3,839 meters above the sea level) was no chore. The shortness of breath was a frequent reminder that I have just arrived in this elevation and my body is not used to it yet, so I need to keep that in mind and take things easy.

Moreover, kind of like express kidnappings are a well documented threat in Arequipa, Puno is known for its hills being locations of frequent armed robberies of foreigners, so heading up to any of the lookouts is a potential risk for every tourist.

I decided I would not be risking it to the higher hills further out, and will be happy with the one nearest downtown so I don’t end up robbed or worse.

Luckily, the uphill climb in the high elevation city was the only challenge I encountered. As a matter of fact, once up, I saw three policemen nearby, giving the impression of the city having been aware of the bad rep its lookout hills are getting and began stationing police in some of the more popular ones.

The information sign at Huajsapata Hill stated that Huajsapata is the Quechua word meaning “the highest part of the crag“. The statue on top of the hill is of Inca Monco Copac, the founder of the Inca Empire, who according to legend, was commanded by the Sun God to emerge from the waters of Lake Titicaca.

The ancient inhabitants of the high plain known as the Altiplano believed that the underground caves beneath Cerrito Huajsapata led to the Koricancha Temple in the city of Cuzco.

Overall, I enjoyed exploring Puno on foot, and although I didn’t suffer any of the more severe symptoms of altitude sickness, the high altitude of the place made breathing a challenge at every step and even the lightest physical activity resulted in quick shortness of breath.