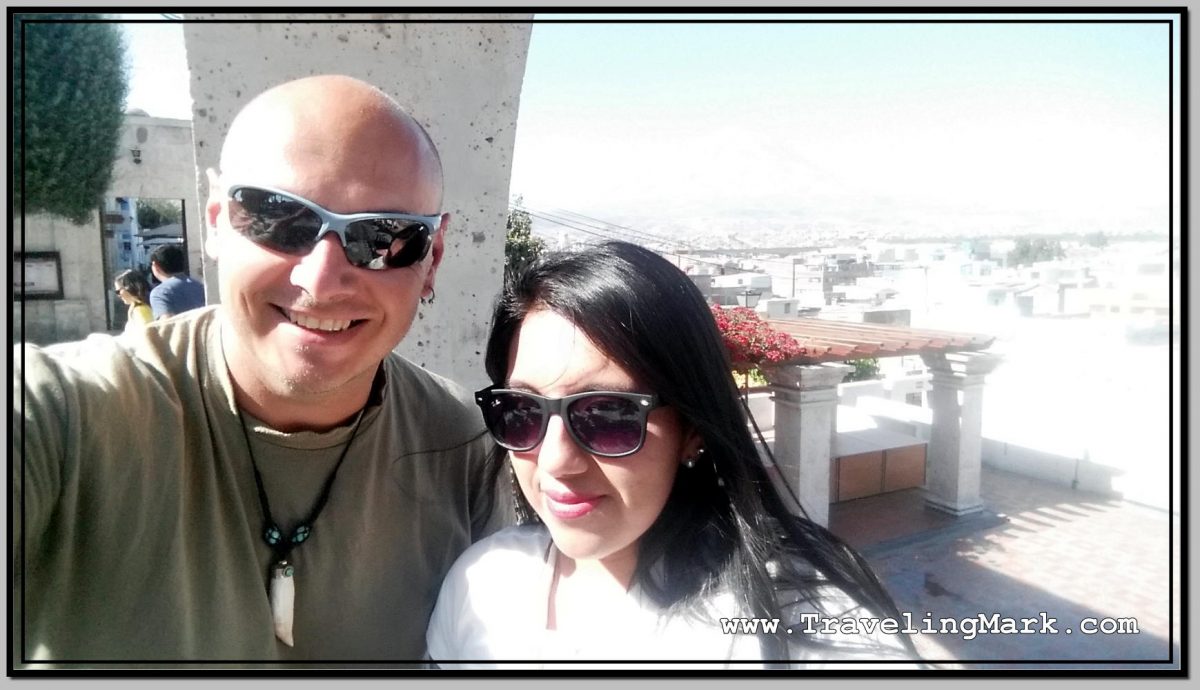 While on my way to get to know Arequipa, I met a local girl who said her name was Milagros (meaning “Miracles“). At first I thought she was messing with me, but apparently it’s her real name and said name is actually quite popular among females in Peru.

Milagros is from Lima, where she works for a bank. The bank sent her for a month to Arequipa. She arrived a day before me. We were both new to the city, and ran into each other as we both sought to get to know it.

We got along well, and went together to a couple of areas in the city located up on hills, from where we got better, unobstructed views of the mountains at the foots of which Arequipa is built.

Misti is perhaps the most iconic of them all, as it towers on its own, forming a spectacular mass of rock seen from almost any part of the city. At the impressive 5,888 meters above the sea level, Misti is however not the tallest. The one to the left of her is Chachani, who’s over 6km above the sea. Both Misti and Chachani, per what I was told by the locals, are active volcanoes. Both had visible snow on their peaks.

There is a third volcano to the right of Misti, called Pichu Pichu, but we never got a good view of that one, perhaps due to the pollution which made the mountain further away very indistinct.

One of the lookouts we visited – Yanahuara – is a bit off the beaten path from the attractive downtown core, but I found it to be well worth the trip. Its somewhat unimpressive square is made interesting by the sillar stone arches outlining the mirador, and a neat Catholic church just across the road from it.

On the arches are engraved quotes from famous Arequipa citizens. There was also an interesting totem pole near them, and an old church on the other side of the road.

We also went to the Menelik Museum. It’s the museum dedicated to the memory of one of Arequipa’s most famous fighting bulls that reigned in the 1940s.

During the brief presentation by a guy from the museum, we were told that Menelik was a Champion bull who beat all then existing bullfighting records, wounding or killing many of his brave and dangerous contenders, and died gloriously undefeated.

At the time of his death, Menelik weighed approximately 1,200 kilograms. Not only was he the best fighting bull in the Arequipa countryside, but he was the one who contributed most to the progress of the community, the construction of schools and public works, thanks to his triumphs.

There is a huge 3D model of the bull said to be lifesize. For a 5 Soles entrance fee, you can sit on the plastic bull for a photo, and marvel at preserved heads, as well as a hyde of other large bulls.

There isn’t a whole lot to see at Museo Menelik, and the presenter spoke too fast for people with limited command of Spanish to understand, so it may not be a worthwhile trip for many visitors to Arequipa, but I quite enjoyed the museum and don’t regret paying the entrance fee.

We also wandered around the downtown core of Arequipa, snapping photos of the cathedral which is on one side of Plaza de Armas, as well as the uninspiring fountain in the middle.

Arequipa is known as the “White City” (La Ciudad Blanca), a moniker allegedly derived from ashlar – the white volcanic stone used for building many of the city’s historical buildings. The rock is said to be from the solidified volcano ashes.

The downtown core indeed is impressive and its old architecture very photogenic. Many of the historical buildings were re-purposed and now house branches of banks or other bigger institutions.

I also liked the area around the San Francisco de Asis monastery. The street of San Francisco is where a lot of night bars are located, and it’s said to be a good place for gringos who want to pick up available Peruanas after dark. I went to a place called Deja Vu on one occasion, and got to participate in free Salsa class which was interesting in that the women were made to rotate after every learned set of steps, so you get to practice each move with a different partner. Both local and foreign girls as well as boys took part in it.

Even at night, the downtown of Arequipa, and Calle San Francisco in particular, are safe thanks to the heavy police presence. At night, the entire street had a cop stationed on every 5 to 10 meters on either side.

Overall, other than the really annoying and bountiful touts in and around the bus terminal, I enjoyed my stay in Arequipa and would not hesitate paying it a return visit. I would however not take a taxi as the risk there was just too high.

I concluded my tour of Arequipa by taking Milagros for supper in one of the upscale restaurants on Calle San Francisco. She ate Chicharron de Cerdo (pork cracklings), I was intrigued by a stew that said it would be either beef or alpaca. I asked the waitress if they had alpaca and said I would order it if that was the case, otherwise I’d go for fried trout.

She assured me they had alpaca meat, so I went with the stew. This was the first time in my life I’ve eaten meat from Alpaca, and found it to be very tender and flavorful, with no fat. The food in the restaurant was great. I even got my non alcoholic beverage in a Moscow Mule Copper Mug: