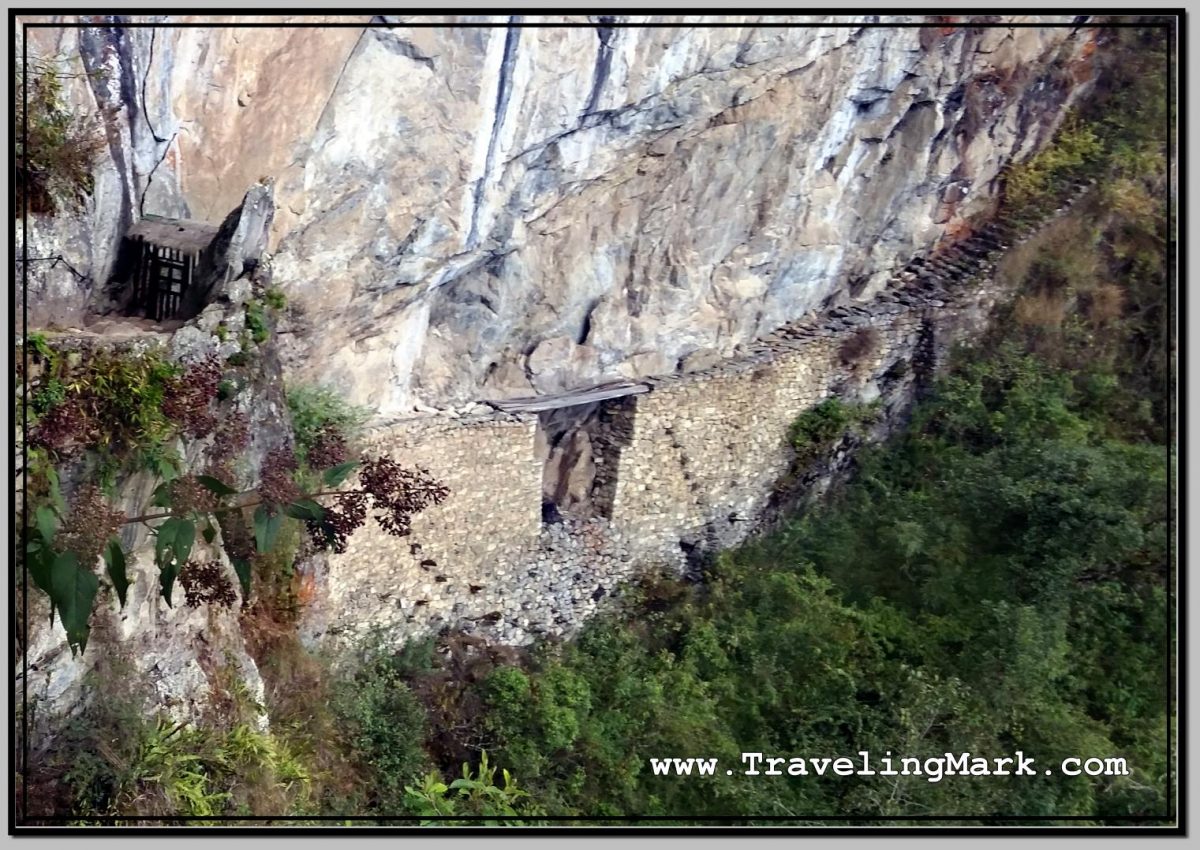 The Inca Bridge is a rather unamazing secret access route to Machu Picchu. Given that the citadel is visited by thousands of people every day, only a handful make it to the bridge. I went during a break in the rain, which eventually resumed, forcing me to seek shelter for half an hour, but during the entire time I only came across a middleaged couple that paid the bridge a visit.

Luckily, whereas the Inca Bridge doesn’t draw the hoards of tourists, access to this partially-inspiring feature is free. At least up to my visit is has been. There is however a small wooden hut at the beginning where everyone wishing to access the bridge needs to sign in with their credentials and the time of entry. Then upon leaving, you check out, allowing the wardens to know that you have not fallen off the cliff and they don’t have to send a crew to recover your corpse.

What makes the Inca Bridge partially inspiring is the fact that the trail to it was built into the utterly sheer cliff. The Incas literally had no slope to work with, so they had to take out enough mountain to make the trail a reality.

The drops are at times stomach-churning, but the trail is always wide enough to not feel vertigo. Unless you suffer some truly uncontrollable fear of heights, I don’t expect you’d have issues walking the cliff side.

Once you walk around to the back side of the mountain, deep in the valley below you will see the Urubamba River along which you walked (or rode on a train) to get to Aguas Calientes, the bridge that gets you across, and even the layout of Hidroelectrica.

The walk is not very long and is for the most part flat with only minimal inclines. It took me about 15 minutes to reach the end, and that’s with frequent stops to take photos.

Unfortunately, the bridge itself cannot be reached. There is a gate that stops you a bit of a distance before the bridge, but you will still have the views of it from the final stretch of the walkway. But then again – if access to the bridge was allowed, Machu Picchu would be recording fatalities on regular basis, so I see why they would not let tourists on the planks.

All the Inca Bridge is, is a gap in the stone path traversed by a few planks of wood. This way, if an invading force found the secret access trail and tried to invade Machu Picchu, the inhabitants would just need to drop the planks into the vertical abyss below, or simply raise them, and the crossing over would become pretty much impossible.