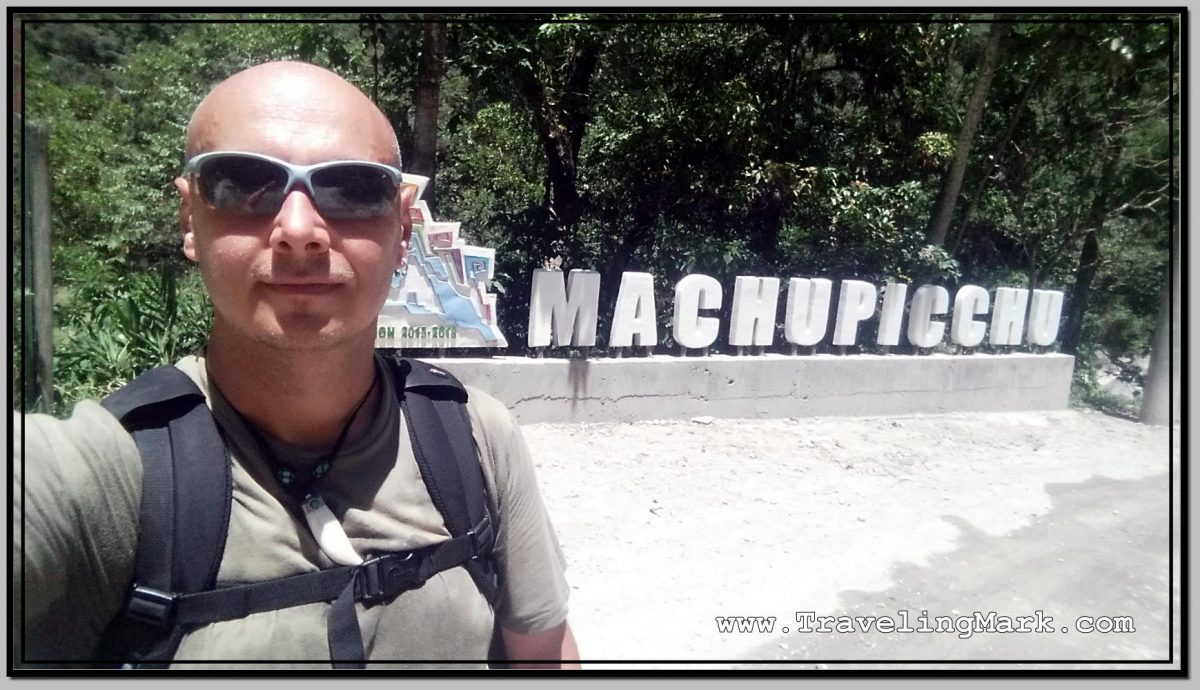 Hidroelectrica, as the last place accessible by a car on the way to Machu Picchu, always has some locals hanging around trying to sell the hoards of tourists passing by stuff. There are also a few restaurants and shops selling fruits and water along the way, but they are all very overpriced. One restaurant I passed also had a sign that they exchanged money, so I asked what kind of rate they offered for US dollars, and the woman told me she’d give me 3 Soles for each Dollar. The official exchange rate at the time was 3.39 Soles for a Dollar, so like everything else, changing money at Hidroelectrica was not worth it.

From where you get dropped off, the foot trail follows a train track, but if you follow that one, you will soon hit a dead end. There is a rather inconspicuous turn heading steep up hill to the right after a couple minutes of walking, which looks like it’s a way to one of the restaurants. And it indeed is, but it also gets you to the other train tracks which are higher up. Those are the tracks that go around the hill all the way to Aguas Calientes.

So basically, if right at the beginning of your trek from Hidroelectrica to Aguas Calientes you did not get your heart pumping by following a trail heading steeply up the hill to your right, you’re going the wrong way and will have to backtrack because the trail you are on leads nowhere. I did it too.

Once on the upper tracks, you’re good to go. Several minutes in and you will pass under a short tunnel, and a few more minutes later, you’ll hit a bridge over the Vilcanota River which has carved the canyon that forms the base for Machu Picchu.

There are several signs along the tracks informing you that it’s prohibited to cross the tracks, but at a number of locations, the tracks cross over creeks giving the hiker no option but to actually walk on the tracks. Besides, the trail that follows the tracks is at one point on the left, and at the other on the right, so like it or not, you will cross on the tracks several times.

Even though the trail is at the bottom of the canyon carved by the Vilcanota River and follows the hill housing Machu Picchu, you will not get any reasonable glimpse of the lost citadel from down there. Still, unless it rains on you, the walk is scenic and the nature as well as the surrounding hills spectacular. You may even get passed by one of the trains.

There are a few restaurants along the trail as well, but as with everything in this proximity, they are expensive. One fellow with a stall was selling young coconuts, but wanted way too much for them so I gave it a pass. It would have been nice to recharge with natural electrolytes, but not at 10 Soles a pop.

If you’re a fast walker and keep your foot steady on the rocky trail, you should get to Aguas Calientes in about an hour and a half from Hidroelectrica. Except for the short uphill steep hike at the beginning, the trail is flat, so it’s not that brutal on your cardio. It’s just a bit hard on the feet, because it’s rocky, so make sure you have good hiking boots on.

But then, once you get to Aguas Caliente, unless you’re cool staying in one of the priciest hotels at the beginning of the town, your trip will finish you off with forcing you to hike steep streets of the town to get to the more economical hostels. There is a tone of them in Aguas Calientes, as the town is as touristy as it gets. But if you’ve made it there, you’ve made it to the foot of Machu Picchu.

Other than in Aguas Calientes, the only way to stay any closer to Machu Picchu would be to book a room at Belmond Sanctuary Lodge, where a night costs $1,000+. If you’re one of the poeple who can afford to shell out this much for a night in a hotel, then you will sleep outside the entrance to the Inca Citadel. For the rest of us, there is Aguas Calientes, or Mchu Picchu Pueblo, as the Peruvian government is trying to rebrand the town.

Here’s also a short video of a PeruRail train that passed me by about three quarters of the hike to Aguas Calientes. This seems to have been just a locomotive that didn’t have any couches transporting people hooked on: