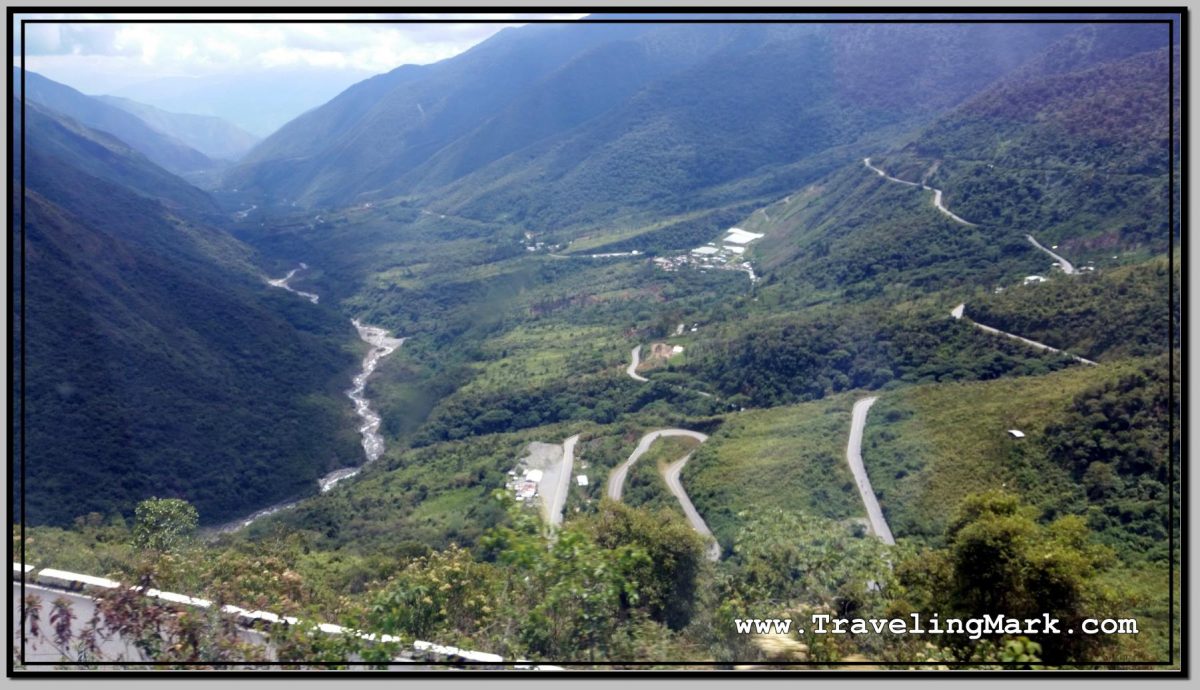 After I’ve concluded the exploration of Inca ruins in Ollantaytambo with the walk to the remnants of the Inca bridge and the nearby pyramid, I returned to Plaza de Armas to find out about the means to advance on my way to Machu Picchu.

I ended up buying a van ticket from Ollantaytambo to Hidroelectrica for the following day. Hidroelectrica (hydroelectric power station) is as close to Machu Picchu as it’s possible to get by car. From there, one must walk around 6 kilometers down a rocky path along the railway tracks to get to the town of Aguas Calientes – a town set up at the foot of the mountain housing Machu Picchu for the purpose of accommodating the trows of tourists visiting the Lost City of the Incas.

I bought the ticket to Hidroelectrica from a woman with a small child in an agency with the office located just off the north-west corner of Plaza de Armas for 40 Soles (just over $12 US). I asked about all the various options they had on offer, and chose the one for 40 Soles because I was assured that this is the only option that will get me as close to Aguas Calientes as a car can get. All other options only went to the towns of Santa Maria or Santa Teresa, which were options for those who wished to explore said towns before continuing onward to Machu Picchu.

The van was scheduled to leave at 8am in the morning, so I headed back to the room in Inka Wasi in order to prepare for the morning departure from Ollantaytambo.

10 minutes before the scheduled departure I showed up in the agency as per the instructions I was given, only to find out that the woman who sold me the ticket was not there, and the guy who was, was too busy dealing with his own clients to pay me any kind of attention.

By the time 8am arrived, I was pretty nervous, but then the single mother showed up, along with her kid, and escorted me to the van. There were dozens of unmarked vans parked along the eastern side of Plaza de Armas. Each appeared to be full to the last seat. The last one in the line had one seat available. The single mother talked to the driver and told me to take my seat.

The not so spacious van was stuffed with foreigners and their luggage. It wasn’t the most comfortable ride and it was to last 4 to 4.5 hours, according to what the single mother told me.

Despite not being very comfortable, shortly after leaving Ollantaytambo the van ride became incredibly scenic. For the first hour, the road was winding up the side of a mountain. We kept gaining so much elevation, I kept my eye out for a sign mentioning the altitude.

Just before we hit the highest point of the mountain pass, there was a sign on the side of the road informing us that we are entering a cloud zone. As we kept moving upward, we finally reached Abra Malaga, where the sign said we were at the altitude of 4,330 meters above sea level.

Had I not conquered 5,000 meters two days earlier at the Rainbow Mountain, this would have been the highest above sea level I have ever been. Although in this case it would have been highly undeserved, as I was taken to the elevation by car.

From Abra Malaga, we started a descend, and had our first break at La Convencion, where there are a number of restaurants on the side of the road for passing travelers. Owing to its proximity to Machu Picchu, the prices for everything that was on offer were ridiculously overvalued.

After the 30 minutes long break, we got shoved back in the van and continued with our trip to Hidroelectrica, and eventually, Machu Picchu. Or so we thought.

The Worst Experience in Peru

After two hours of the estimated four to four and a half hour ride to Hidroelectrica, the van pulled over at a gas station and told everyone to get off and continue onward on foot.

We were all in shock, myself included. I paid for the ride all the way to Hidroelectrica, but was only taken half way there. The driver washed his hands clean off all the responsibility, and simply told everyone that we each will have to call our respective agency in order to sort it out with them, if we’re unhappy.

What pissed me off about this the most was the fact that I specifically asked for clarification if this van takes me all the way to Hidroelectrica twice – once when I was buying the ticket from the woman who sold it to me, and the second time when I asked the driver before I boarded the van.

Turned out, the locals from the villages on the way to Machu Picchu had a pet peeve with the government, and their way to gain requested concessions was by making the life difficult for foreigners who bring money they work hard for abroad to support the local economies of the protesters, even though none of the locals did anything to deserve it.

And without a shred of remorse, they’d drop us off in the middle of nowhere, fully aware that this is exactly what would happen, and leave us there stranded and without options. Many of the tourists had their accommodation paid for up front (I never do that, so I was lucky not to be one of them), so for them not reaching Aguas Calientes on the day of the trip would represent significant loss. Especially if you consider how overpriced everything in Aguas Calientes is.

The trip to Machu Picchu was without a doubt the worst experience I’ve had in Peru, if not the worst overall in 10 years of traveling. In hindsight, I wish I would have turned around and given up on machu Picchu, because no part of it was worth the absolute crap I as well as all other tourists had to put up with because locals do not appreciate the support tourists provide to the area.

Unfortunately, I made the decision on the spot to walk the rest of the way, tricking myself into falling for the unworthy delusion that is Machu Picchu.