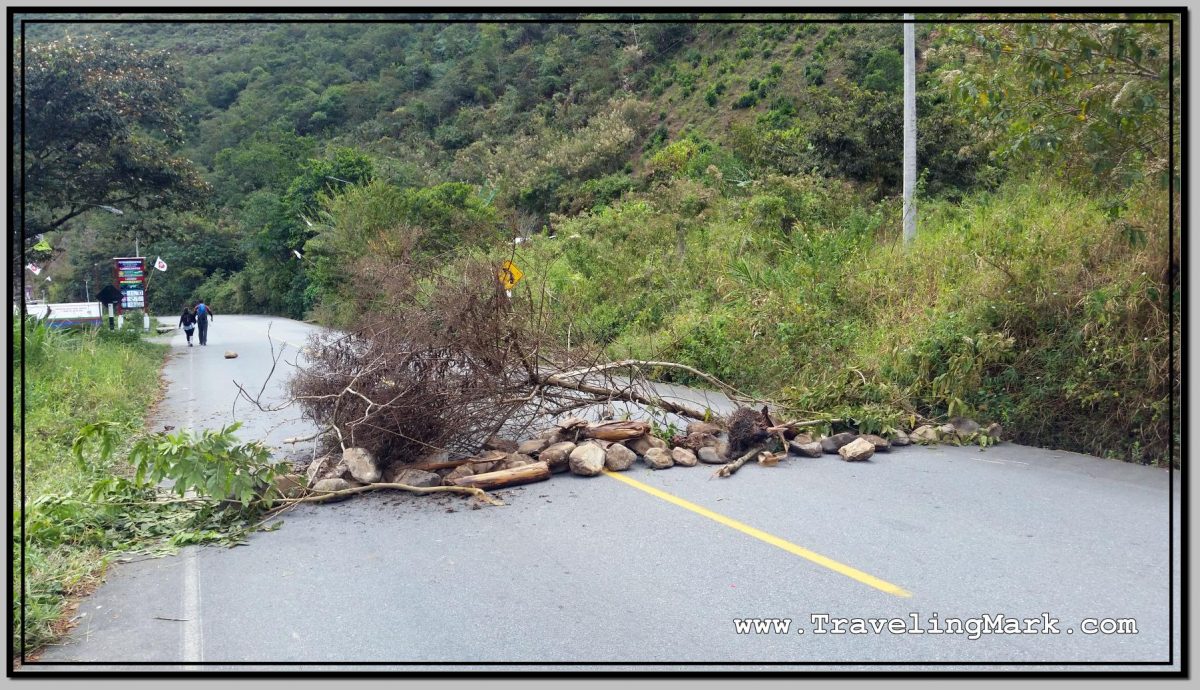 When I was charged for the full journey of being taken from Ollantaytambo all the way to Hidroelectrica, the roadblocks along the way that halted the traffic mid way through have been in place for a whole week.

During that entire week, the same travel agencies have been charging tourists for the full lengths of the journey, while lying them into their faces that they will be taken all the way to Hidroelectrica, despite being fully aware that none of the tourists who had bought that trip anytime within the week proceeding my trip got to the destination.

Similarly, the same vans have been taking tourists mid way, knowing full well that none of them will be taken all the way to Hidroelectrica, but lied to every single one through their teeth that they are getting to Hidroelectrica, even though they knew full well that the road blocks remain in place and none of the previous trips during the week have delivered tourists to the destination.

Had I been hinted by either the travel agency or the van operators that there have been road blocks for a week on the way to Machu Picchu, and there is pretty much no chance a vehicle can get to Hidroelectrica (the place nearest Machu Picchu that’s accessible by a motor vehicle), I could have easily postponed my trip until the protests have ended and the road become drivable again. But I guess it’s outlandish to expect honesty from Peruvians when they smell the dough.

Peruvians love milking tourists on every step with entrance fees to every little corner that garners any kind of interest. But at the same time hate the tourists enough to make their life difficult simply for coming to Peru to spend money they earned abroad on the local economy.

Such was the case of roadblocks on the way to Machu Picchu. Knowing the road passing through their villages is the only access road to Machu Picchu, the communities of Amaybamba, Huyro, Huayopata, Santa Maria and San Pablo set up roadblocks in order to make access to Hidroelectrica by car impossible.

Hundreds of tourists who refuse to support the rip off practices of the Peruvian government who charges foreigners upward of $480 dollars for a train trip to Aguas Calientes (the town at the foot of Machu Picchu) for which the locals pay 10 Soles (about $3), opt to hire a vehicle to Hidroelectrica, from where it is a little over an hour on foot to Aguas Calientes, as the more economical, albeit more tiring option
of reaching Machu Picchu.

Even though the economy of every single one of these villages immensely benefits from the fact that they did nothing to deserve it, but are geographically close to Machu Picchu so the hoards of passing tourists often stop to buy a drink, a snack or cooked food from a restaurant, or stay a night in hotels where available, they are still ungrateful for it and their way to protest when they wish to demand something from the government is by making life difficult for said tourists.

Can you think of a more unworthy people to spend your hard earned money on while traveling?

The van that promised to deliver us to Hidroelectrica dropped us off somewhere outside of Amaybamba. The driver simply told us this was the end of the trip for us, and we needed to get off his van and if we didn’t like it, we’ll have to bring it up with a travel agency that sold us the trip and sort it out with them.

The worst thing was, that whole area around Machu Picchu is infested with biting midgets. We got thrown out of the van and instantly got swarmed and attacked by these tiny, quarter of a fruit fly sized insects that rip a hole into your skin with their razor sharp jaws to lap blood as it oozes out. Unlike actual mosquitoes, these super-tiny insects are near invisible so you could be getting bitten by three dozen of them at the same time and never notice until it’s too late and your legs itch like mad.

Unfortunately, the van driver didn’t even offer us an option to return to Ollantaytambo. He just dropped us off in the middle of nowhere, none of us knowing where we were, and told us to help ourselves any way we could.

Another bad thing was that the locals not only demanded concessions from the government by making life difficult for tourists, but were also openly hostile toward tourists who had no other option but put their backpack on and cover the second half of the 4 hour long vehicle trip on foot.

I have never before visited Machu Picchu, and was thus under the disillusion that the place was worth it, but one way or the other I didn’t really have many other option, so I joined the rest of the confused tourists, and put my backpack on to keep moving forward on foot.

The slight positive at the time was the fact that the road from where we were, at least as far as Santa Maria, the first village on the way big enough to have hotels, was downhill. That was however only of relief for the day, because it came with the understanding that if the road blocks were not removed by the time I need to go back, then I will be walking the same distance up hill.

There were in fact many tourists we came across who walked the opposite way. Some of them got to Aguas Calientes before the roadblocks were set up, so they only had to do the extra walk returning, but even so, the return trip was vastly up hill which made it very strenuous.

What kept most of us alive at the time, was the deliberately misleading information that the roadblocks are only as far as Santa Maria, and that from Santa Maria we’ll be able to catch a colectivo (a taxi that serves as a local transport which leaves when full) to Santa Teresa, and then from Santa Teresa another colectivo to Hidroelectrica.

Needless to say, finally arriving in Santa Maria after more than 2 hours on hiking with backpacks on on an open road without a shade as the intense sun kept blasting on us felt amazing. But the feeling was short lived.

At that moment, I finally realized what I should have realized a long time ago – Machu Picchu is simply not worth it. I should have turned on my heel when the van dropped us off and somehow hitchhiked my way back to Ollantaytambo.

But by the time I arrived in Santa Maria, I was already way too invested in the trip to turn around and track back uphill.

In Santa Maria, the paved road ended, so the rest of the walk was on a dirt road covered with rocks. There was a fell tree used as a roadblock about a quarter way through.

That day, I was mentally prepared for an hour long walk from Hidroelectrica to Aguas Calientes. Had everything gone the way it should have, I would have arrived in Aguas Calientes in mid afternoon, which would have given me enough time to find a room before dark.

But after arriving in Santa Maria, it became clear that I will not make it to Aguas Calientes by daylight. Luckily, unlike most other tourists stranded in the same way, I did not have a room booked beforehand in Aguas Calientes, so for me the option existed to either stay in Santa Maria or Santa Teresa.

When it all hit me about how unworthy Machu Picchu is, I played with the idea of staying the night in Santa Maria, and doing the 3 hour uphill walk back to the last road block to hitch a ride to Ollantaytambo with someone, but somehow got influenced by a disillusion that perhaps in the end, Machu Picchu will be worth it. So I carried on to Santa Teresa.

But whereas by the time we got to Santa Teresa it was already getting dark, if I were to make it to Aguas Calientes the same day, I would have to hike through the unlit forest trail at night, I made a decision to spend the night in Santa Teresa, recover a bit from the unplanned strain in the sun and do the hike to Aguas Calientes during daytime the following day. All other tourists from the group with which I walked however already had their rooms in Aguas Calientes pre-booked, so all of them carried on.