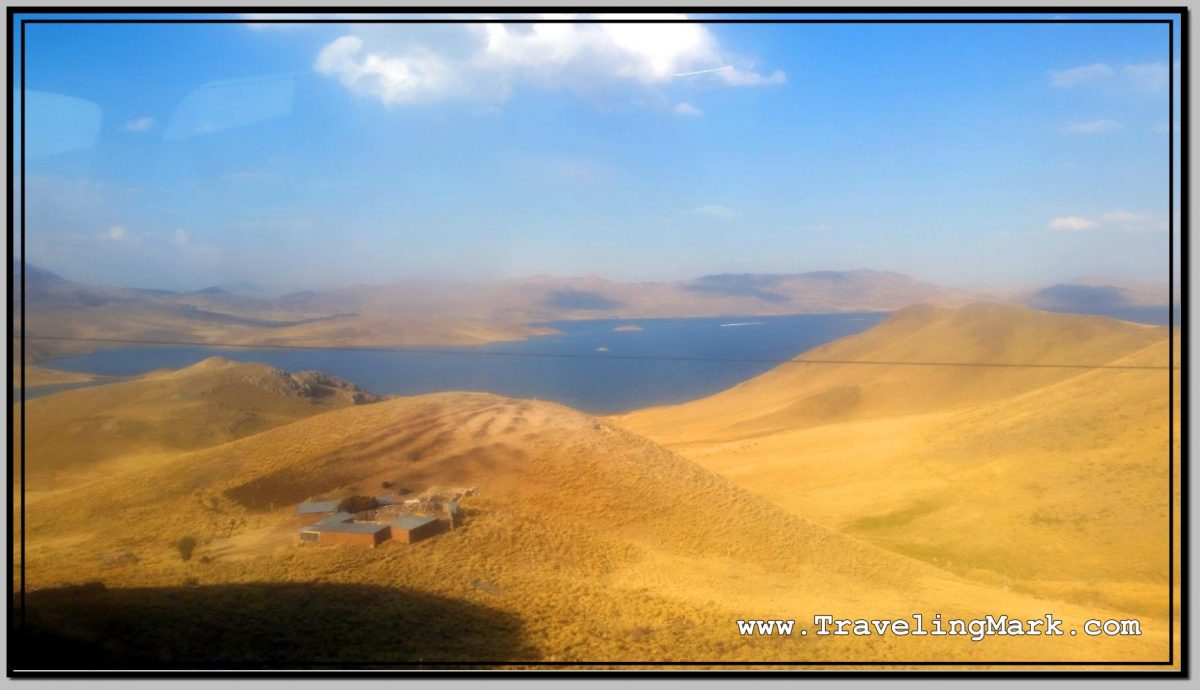 I stayed in Arequipa for a week. I liked the climate, the city and the surrounding scenery with the dominant Misti Volcano. I didn’t like that frequent and well documented express kidnappings make taking a taxi a super risky business, so I got by without, but overall I truly enjoyed my stay. But after a week of being an Arequipeno, it was time to move on. I decided to head down south to Puno – a city on the shores of Lake Titicaca, located at the elevation of 3,830 meters above sea level.

Being quite familiar with the downtown core of Arequipa, I checked out of Hotel Diplomats at around 10:30am and took a 30 minute walk to the bus terminal. Several operators sold tickets to Puno, so I chose the one whose bus was leaving the soonest. On the map, Puno didn’t seem all that far, so I expected the bus ride to take maybe a couple of hours. I should have seriously looked more into it, instead of assuming the distance as the crow flies would somehow be indicative of the time it would take to get there.

I rode with the company called Alas del Sur. Having mistakenly expected a few hours long bus ride, it was just a local type of nothing-fancy bus. The departure was at 11:30am.

The ridiculous thing about the Arequipa bus terminal was that as always, the hygienic services were charged for – a cost of 50 Centabos, and you were issued a ticket permitting you the use of the bathroom. I got to say that was a first for me.

Next ridiculous thing was that there was a 2 Soles terminal tax imposed on everyone looking to depart with a bus from the station. It was kind of like an airport fee you get charged for as part of taking a flight somewhere. After Arequipa, I’ve encountered the bus terminal fee a few time at other terminals in Peru. Peru is ridiculous like that.

An even more ridiculous thing was that everyone boarding a bus was taken a mugshot of. Even though I’m a citizen of a European Union country, the GDPR was useless to me in Peru. Needless to say, after Arequipa I realized that the mugshot taking in order to be allowed to use a bus you have paid for is a common practice in over-the-top Peru.

The bus left as scheduled at 11:30am, and I truly enjoyed the scenery as we went along. The vegetation-free, arid hills, with towering volcanoes often bearing snow covered caps, were spectacular on every turn.

A couple hours after leaving Arequipa we passed through the national park Reserva Nacional Salinas y Aguada Blanca with multiple hoards of wild vacunas roaming about. There were plenty of them on the vast planes of the area, but they were always at a distance from the road, and taking a reasonable picture of them from a moving bus was a challenge.

Somewhere around there I also spotted my first cloud I’ve seen since leaving Ica for Nazca. This part of Peru receives very little precipitation so despite cold nights, days are sun filled with clear blue skies and nothing obstructing the sun for months on end.

As the sun got lower, we passed by Laguna Lagunillas which I thought was the beginning of Lake Titicaca, but it was still far from it. The hours were passing by and soon enough it became very clear to me that we’re not getting to Puno during daylight. As a matter of fact, by the time we arrived in Puno, it was already past 9pm, making me truly regret not looking into how long the trip to Puno would really take. Had I known I’d waste all daylight if I take a bus during the day, I would have waited in Arequipa to take an overnighter instead, and arrive in Puno in the morning.

Having truly messed up on that, I had no option but look for accommodation in the city I did not know late at night again. What made matters worse was that because of the high altitude and the proximity to the highest commercially navigable lake in the world, nights in Puno are bone-chilling cold.

Luckily, a number of hostels near the bus terminal provided enough opportunity to secure a room rather quickly. The cost for what you get was however off the charts. The problem was then further compounded by the fact that once I paid for a room at El Lago, I realized the internet in the hostel was spotty, frequently cutting off so every simple task took a very long time to complete.

The rooms in the hostel were not heated, so the incredible cold of the night outside made any possibility of having a decent rest overnight a challenge at best. Likewise, the shower water was only a little warmer than fully cold, having only been warmed up by the daytime sun. Needless to say, taking showers in cold water when you’re shivering to begin with was an adventure in its own right.

The hostel also did not provide a roll of a toilet paper, but instead just a few sheets torn off from a roll. At 40 Soles per night, it was definitely one of the worst deals for the money I’ve had in Peru. But then again, I found Peru to be expensive in general. Especially when value for money is concerned.

The worst part of staying at El Lago, however, was the constant noise from incessant screaming and loud talking by the guy at the reception with his mates. Earplugs were of little relief against the party-night type banter in the place.

Nevertheless, the brutally cold night didn’t kill me and come morning, I was ready to truly hit it in Puno.

One of the earliest things I learned when I left to live as a recluse in the Canadian wilderness was that nights out there are extremely cold even in Summer. I did my hermit experience over the warmest months of the year – June, July and August, but while it was nice and warm during the day, night time temperatures dropped below zero. And since I didn’t anticipate freezing temperatures, I neither had clothes, nor other equipment (sleeping bag, tent or stove) to keep me warm at night.

The lake I chose for my stay away from civilization was very remote, but – to a point – accessible by car. The nearest paved road to the lake was more than 100km away but invasive logging industry left a passage through the forest which I was able to use to get myself closer. Needless to say, this forestry equipment road was full of obstacles and rough terrain that’s normally only negotiable by heavy machinery with continuous tracks, but being a skilled driver and having been blessed with dry weather, I was able to safely traverse this incredibly challenging stretch of the road all the way to the lake.

The entire journey took me about 5 hours to complete, but I was only about 300 km north of Edmonton as the raven fly. I don’t know whether it was these extra 300 km north or the fact that there is no civilization anywhere near the lake, but as someone who spent countless Summer nights outside while living in Edmonton, I can tell you for sure that while it does get cold at night even in Summer, it doesn’t get below freezing. Not in Summer. But as I learned after my first night out in the wilderness (and each night thereafter), despite daytime temperatures reaching pleasant 29 °C, they were followed by night time drops to -3 °C.

5 hour long drive north of Edmonton and you’ll experience brief Winter every night even during Summer months. I personally think this had more to do with complete remoteness of the wilderness than its placement along the longitude. I have not done any scientific research on it, but high concentration of warm bloodied mammals who radiate body heat into the environment surely contributes to keeping the temperature in urban centers warmer than in the wilderness. And it’s not only body heat – you have heat generating car engines, thousands of computers, stoves used for cooking, machines used in factories, people bathing in hot water – so many things to keep the environment warmer… And on top of it all, you have pollution that keeps the heat trapped.

During my first month in the wilderness, it rained almost every afternoon. July was a little better and come August, there was hardly any rain. Sky was cloudless most of the days with sun baking down on me from wee morning hours until late night. Yet even in August, when daytime temperatures were in their 30’s, as soon as the sun was gone, the gauge started dropping rapidly and got to freezing just before the dawn.

Luckily, I had everything I needed to keep the fire going and there was plenty of dry firewood around, plus night only lasts a few hours a day this time of year so even though ill equipped, I kept myself warm-ish by utilizing natural resources. Regardless, it was a lesson I learned the hard way – remote Canadian wilderness can be very cold even in Summer months. Especially at night.

In order to survive, I had to swap night with the day. I got most of my sleep during the day when it was warm and I didn’t have to spend time feeding the fire and when the sun went down, I kept myself entertained by staring at the stars. It’s mind boggling how many of them there are and how clearly they can be seen when you’re away from city lights and pollution.

First night was hands down the worst but I got right down to building a primitive shelter that would tightly wrap around the bed of dry leaves the following day. I kept improving on my natural tent every day, but night time temperature drops were just so severe, I quickly realized that the only way to stay warm at night would be by building a shelter big enough to have a fire inside. If such shelter was well isolated, the fire would keep the interior warm even during freezing nights. One would still need to feed the fire, but pay back in feeling warm over night would be well worth it.