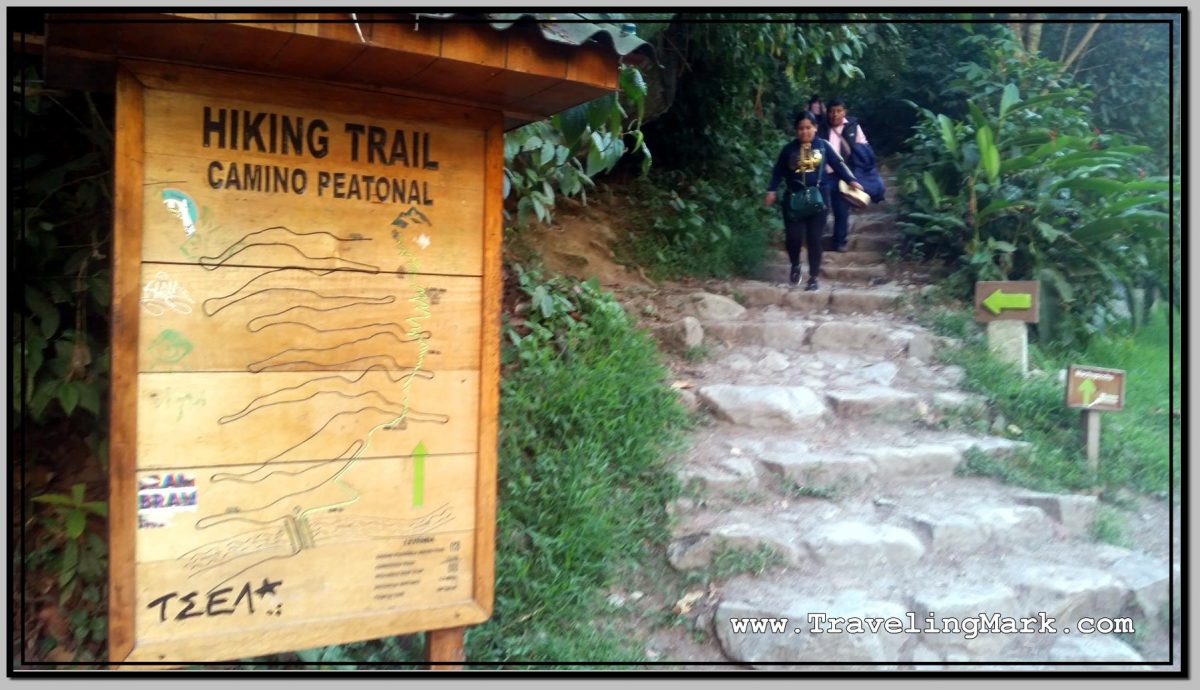 Even though the super costly ticket to Machu Picchu permits the visitor to enter the Lost City of the Incas for only half a day, you lose part of the half-day to standing in line at the office selling tickets in Aguas Calientes, because even when they’re open, they refuse to sell the tickets any sooner than 2 hours before the permitted visit begins.

If you factor in the fact that you will spend at least 2 hours in line because thousands of people will show up to get the ticket, and unless you shell out an additional $12 US for the bus ride up there, you will also need another hour of ultra strenuous hike up a steep hill to reach the gate of the ancient citadel, despite shelling out $46 US for the half-day entry, you will have lost one-fourth or one-third of that limited time allowance trying to get the paperwork for the entry in order.

That was certainly the case with me, but whereas I already stood in line and shelled out 152 Soles for the entry ticket, once I had it, I hit the road to get up there. And let me tell you, ascending that hill is no walk in the park.

It involved about 15 minutes of backtracking through Aguas Calientes back toward Hidroelectrica, until one reaches the metal bridgeS over the Vilcanota River shortly after which a sign will direct you off the windy road used by the buses and onto the trail for hikers with an apparent wish to spit out their lungs on the super steep hill.

Let me say that again – that hike is steep. The stone steps laid on the slope to make the hike possible will force you to raise your feet up high to make each step, and it will squeeze every bit of energy out of your thigh muscles so you better have some if you decide to undertake the hike instead of taking the bus. Your heart will be pounding along the way too, as from the moment you take the first step up, all the way to the last, you will be going through some serious cardio exercise with high demand for oxygen.

And as you go up, you realize that once you go down, the strain will be moved from your heart onto your knees. Because the hill is really steep, there is a significant height difference between individual steps so going down will force you to land really hard on your feet, putting high strain on your knees right from the start. And that will last all the way down. I think in my personal case, the way down wore me out more, because my knees really took the beating there. My thighs were trembling by the time I got up, but the muscle exhaustion wore out after a while. The wear to my knees however accompanied me for months after descending Machu Picchu.

Also, you better wear a pair of quality hiking boots with strong soles, because going down those steep stone steps will put their durability to the test. And without strong soles on your shoes, it will be the soles of your feet that will take the beating.

As with any challenging hike, make sure you hydrate well before the start and tag along a bottle of extra water to keep yourself hydrated along the way. Some light snack could also be helpful, even though I didn’t bother with one myself.

Whereas the hiking trail follows the right side of the road made for the buses, it intersects with the road on a few occasions, so the option to avoid the steep trail and follow the switchbacks on less steep, but longer road exists. I considered that option a few times, especially while going down because the steep steps were really making it hard on my knees, but whereas it rained on the day of my visit to Machu Picchu, the frequent buses turned the road to muddy hell so continuing along the incomparably cleaner stone trail was much sounder at the time. Moreover, the Peruvian drivers are not particularly known for being respectful of pedestrians so sharing the narrow road with multiple buses squeezing in from both direction could be potentially hazardous to one’s life.

There is one intersection of the hiking trail with the bus road that will force you to walk up the road a bit anyway, and look for the spot where the trail continues. It’s somewhat marked, but not immediately obvious after initially getting on the road.

Along the upper sections of the trail you will encounter a few local women selling refreshments and whereas the majority of the people take the bus up and down the mountain, they are rather aggressive with the few who take the mountain on foot.

Overall, if you like to challenge yourself, I’d recommend that you take the hike. Though fact of a matter is that this hike would be done for the challenge, not for the views, as there are hardly any due to the vistas being blocked by trees, but you’ll get the views once you get up to the citadel. If however you’re not somewhat physically fit, or you have sensitive knees, you’re probably better off taking the bus. Although it will likely have been the most expensive bus ride of your life. But then again, everything about Machu Picchu is expensive and it’s purposefully maintained that way.