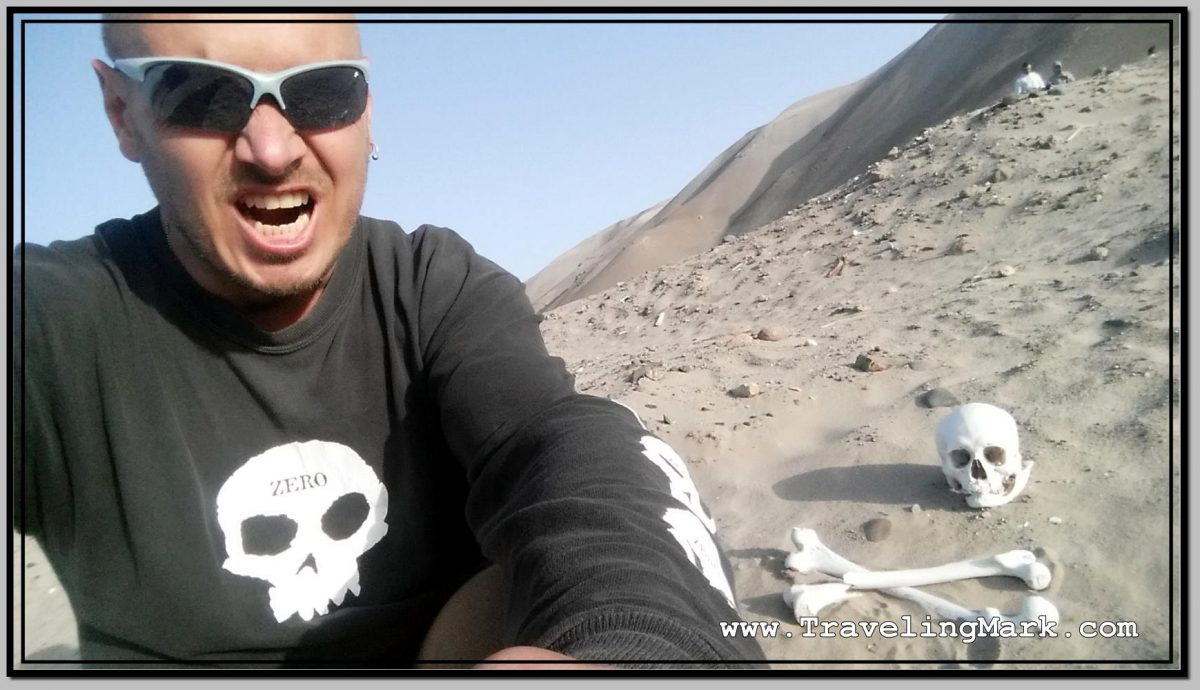 Having gotten seriously windswept by the sand storm on the way to and at the Cahuachi Pyramids, our Edunas tour continued through the desert surrounding Nazca into an ancient cemetery that was in the recent years looted by treasure hunters.

The harsh weather continued as we were getting hit by strong winds and sand kept blasting into our faces and every bodily orifice. The entire landscape we were passing through however kept me very appreciative of the experience.

I have never seen anything like this before. I kept thinking to myself – if NASA wanted to fake another moon landing or a Mars mission, they could film it here and nobody would believe it could have been filmed on Earth. In Peru. Absolutely mindblowing, moon-like scenery kept emerging from every dune, after every turn.

After passing several kilometers across unmarked desert (props to the driver), we reached the cemetery, which was essentially a large swath of the desert within the endless sands of which the Nazca culture buried their dead.

The graves were disturbed by treasure hunters who thought they would find gold or other valuables with the dead, as other ancient South American cultures used to do that, but the Nazcas did not. Consequently, the looters came off either empty handed, or with little of truly high value, forever changing the historical site they had ransacked.

It would appear that the Nazcas were creating mass graves, which would consist of the piled up dead who were then covered with sand, creating sand hills within which the corpses of the deceased were meant to dwell. The living, having had the strong beliefs in the afterlife, buried their dead along with pottery filled with food, so they have something to eat on their journey into the outer world.

As a result, the sun bleached bones are often mixed up with blackened corncobs, clay pots, even ropes. The whole area has a very surreal feel to it. Some of the skulls still have the original hair attached to them. Many are remarkably well preserved by the dry, dusty climate.

Our tour guide told us the cemetery had been lost under the sands of the Nazca Desert until 1920, when it was rediscovered by tomb raiders. The ransacking left many of the bones and skulls unearthed, offering one a unique opportunity to find themselves surrounded by a sea of bone matter, but the ransacking caused that peace of the ones buried there has been disturbed.

Our driver snapped a picture of me sitting in the buggy, while other tour-goers still wandered among the bones of the dead: