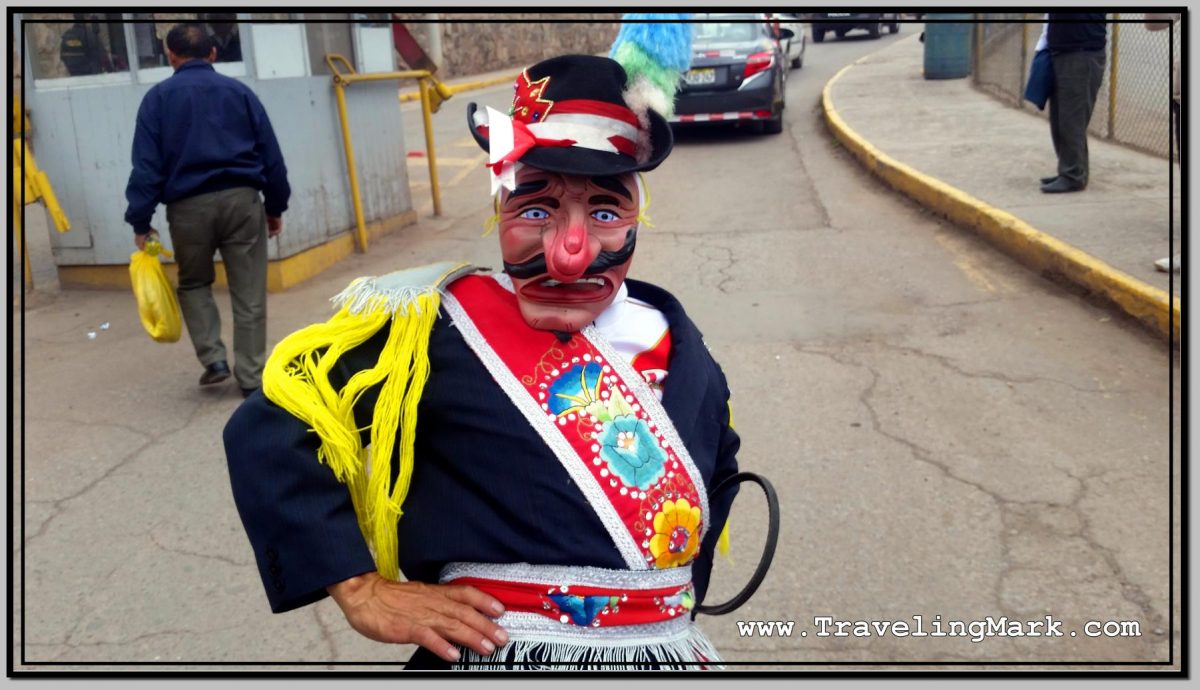 Every September 14, the El Señor de Huanca (The Lord of Huanca) festival is celebrated in Cusco, Peru. In 2018, September 14 fell on a Friday, which was just the day when I was leaving Cusco for a weekend in Lima after spending just a day there. As I reached the bus terminal on foot, I came across groups of dancers dressed up in costumes, accompanied by marching bands, who caught my interest so I paused for a few minutes to snap some pics and videos of them.

Characterized by a pilgrimage of devotees from Cusco and other parts of Peru, and even from different countries including Bolivia, Paraguay, Argentina and Chile, their primary goal during the El Señor de Huanca festival is to go to the Sanctuary of Huanca to receive blessings.

The sanctuary of the Lord of Huanca is located at 3,100 meters above the sea level in the foothills of the Pachatusan mountain in the district of San Salvador, province of Calca in the department of Cusco. I had my bus ticket booked for the day, so I did not participate past watching the promenade in front of the terminal.

The most devout do the pilgrimage to the sacred sanctuary on foot – a feast that takes around 6 hours, according to what I was told. Estimated 30,000 pilgrims make their way to the area each year.

Even though I haven’t been there, I understand that the Sanctuary of Huanca contains the stone painted with the motive a Christ overwhelmed by the lashes – the Lord of Huanca.

Origins of Faith in Huanca

There are two main stories of how devotion to the image of stone began.

The first story dates back to 1675. Diego, an Indian tired of the mistreatment by the Spaniards, escaped to Huanca and prayed all day so they would not find him. Then the image of the bloody Christ would appear before him. Amazed by the miracle, Diego sent a painter to that precise place to reproduce what he had seen. Where the stone was painted, a chapel was built that would later become the sanctuary.

The other version speaks of a Bolivian named Don Pedro Valero, who met a foreign doctor who, miraculously, saved him by giving him a water treatment. In return, the doctor, who responded to the name of Enmanuel, only asked Valero to visit him at his home in Huanca. Great was his surprise when, in 1778, he arrived at the place and the settlers told him that in that town there was nothing, just an abandoned chapel. Terco went to the designated place and found a stone painted with a whipped Jesus Christ. The incredible thing was that the face of the son of God was the same as the person who had healed him.

Here’s the video of the devotees dressed in costumes celebrating El Señor de Huanca with a dance in the street in front of the bus terminal in Cusco:

The Pchum Ben Festival of the Dead was well under way when I took my Vietnamese friend Ha to the Royal Independence Gardens to enjoy the shriek of the Flying Bats with me. Because Pchum Ben is a major festival in Cambodia, both Preah Ang Chek Preah Ang Chorm Shrine and Ya Tep Shrine were very busy with hundreds of people coming in and out all the time. As it goes in Cambodia, where there is a group of people, there are street vendors offering various decorative and spiritual items for sale. Aside from pretty flower wreaths, one of the most offered articles by these temples were live birds and other live animals for sale.

I found this extremely disturbing and saddening. I don’t know how live birds sales go together with principles of Buddhism, but Cambodian Buddhists take great pride in trapping live animals, keeping dozens of them cramped in small cages and selling them for profit to other Buddhists who come to the Buddhist temple to worship the statues of Buddha. From what I’ve noticed, people buy these live birds, keep them clenched between their palms and close to their mouth while they silently utter their prayers (or wishes?) and release them with a beaming smile afterwards.

This act of release is what matters, I suppose. You can see the obvious spark in their eyes as they are doing it, however what they don’t realize is that in order to release the bird, that poor animal needs to be caught and caged first. But the saddest part happens shortly after the release. These birds have been kept in overcrowded cages, having no room to stretch their wings, often bleeding, suffocating or getting trampled by other birds – all that on top of starvation and dehydration because they are not fed which renders them unable to properly take flight after the release. As a result, you see those birds released, they take off and attempt to fly but hit the ground very quickly. Defeated and at the end of their strength, they helplessly die shortly after release. Only few are well enough to actually go and enjoy the freedom again. Those are presumably the lucky ones that get purchased before they are in the cage for too long.

Short walk across the fields surrounding the temples offers clear picture of what happens to the majority of the birds upon release. You can’t take two steps without stepping on a dead bird. It’s a very sad sight that makes whole purpose of “releasing” a life into the wild a complete joke.

I have seen young boys walking around with long stick, poking them with great thrusts into bushes. Then I saw the same boys walking towards the women sitting at the temple with cages full of live birds for sale, delivering another captive to join the others. I don’t know how they catch those birds with just the sticks, but they must have the means. The thought of hurting an animal is very saddening to me so I never actually wanted to see this in action. However I do think those birds suffer some trauma during the capture which could also be the cause of excessive bleeding in the cage and premature death.

The worst thing about this whole ordeal is that Cambodians take great pride in “releasing” those live birds. Nobody seemed bothered by the fact that those living creatures suffer a great deal while they are kept in horrible conditions which affect their ability to fly and result in near certain death. Shockingly enough, aside from having live birds for sale, women with cages also sell other live animals, such as turtles. I don’t know what exactly is done with turtles after they are sold, but I don’t expect much. They are likely starved to death as they are piled in buckets on top of one another without water or food. I am not a Buddhist expert, but whatever divinity the Cambodians are trying to impress with these acts, I’m pretty sure that it’s not working. If anything, it has the opposite effect. Live and let live, the principle on which Buddhism was founded is directly breached and crapped upon by everyone who buys or sells a live bird like this. You don’t have to be an expert to understand this.

This photo gallery contains pictures of Preah Ang Chek Preah Ang Chorm Shrine in the Royal Independence Gardens in Siem Reap taken at night. This was also the first night of Pchum Ben Festival so the shrine was being continuously flooded with Cambodians bringing offerings for the Buddha and food for the dead. Few stalls selling decorated flower bouquets, decorated coconuts, burning incense sticks and live birds were nearby so devotees can purchase those for use within the temple. There was a band with traditional Khmer instruments set on the shrine floor playing traditional Khmer music. Few monks were seated on the side to give people blessings and take offerings of food and clothes from devoted Buddhists. Inside a small room, there were two statues of Buddha and people were hanging flower rings on them, touching their hands or just leaving other offerings at their feet. Hundreds upon hundreds of incense sticks were being lit up and burned in a large ashtray. The smoke from these could be smelled and seen half a mile away. Devotees also prey before the Buddha images with their palms joined together for a prayer while burning incense sticks are held between the palms. Preah Ang Chek Preah Ang Chorm Shrine is a small, but nicely located and beautifully built shrine that enjoys vast popularity among people of Siem Reap. The gallery is below:

As I was receiving my introduction to Buddhism, I was told about the reason why Wat Preah Prom Rath pagoda was so full of people, why traditional Khmer music was being played from a loudspeaker why there was so much food all over the place. It was the first day of Pchum Ben Festival, which was loosely translated to me as The Festival of the Dead or sometimes as The Festival of the Souls (or spirits).

Pchum Ben is a Buddhist Festival but even though Cambodia is surrounded by other Theravada Buddhist nations, Pchum Ben is only celebrated in Cambodia and nowhere else. Pchum Ben Festival celebrations last for 15 days with final, culminating day falling on the 15th day of the 10th month of the Khmer calendar. Granted, Khmer calendar is different from the Gregorian one which is the one used by western countries so even though it was the beginning of September, the Pchum Ben Festival has already started.

The most prominent observation a foreigner notices during Cambodian Pchum Ben Festival is the fact that it involves a lot of food. You see Khmer families coming to temples and pagodas carrying dishes with food which they arrange along the walkways while they spend hours chanting prayers inside temples, kneeling before statues of Buddha. As it was explained to me, the food is meant for the dead. The premise of Pchum Ben Festival is to feed the spirits of the dead. Cambodians firmly believe that the act of feeding the souls of their deceased predecessors will make their stay on Earth more enjoyable.

During Pchum Ben the spirits of the dead descend from the spirit world and walk the Earth. Those who are still alive prey for their souls and offer them food. As it goes with Buddhist Monks in Cambodia, people also bring food for them. The festival is very spiritual and considerably one of the most important festivals in Khmer calendar. As the history of Pchum Ben has it, the festival was originally celebrated for three months but has been shortened to 15 days as modern lifestyle makes 3 months of celebration complicated.

After me and my girl guide were done talking about the life of Buddha, we went to the prayer hall where several people were already gathered and chanted their prayers as one while their chants were played back from a loudspeaker. As confused westerner, I asked if I could join them for a prayer and take a few pictures while I was at it. There was no issue with that as Cambodians are vastly tolerant of foreigners when it comes to cultural and religious differences.

This was the beginning of Pchum Ben Festival but as it became apparent during the following 15 days, Pchum Ben was a big deal for Khmer people who take the festival very seriously and dedicate most of their focus to it while the festivities last. Even Cambodians who are otherwise non religious would prepare their food and bring the offerings to one of the temples. during Pchum Ben Little did I know at the time that the most significant events of my personal stay in Cambodia will be directly connected to Pchum Ben. Let the festivities begin!