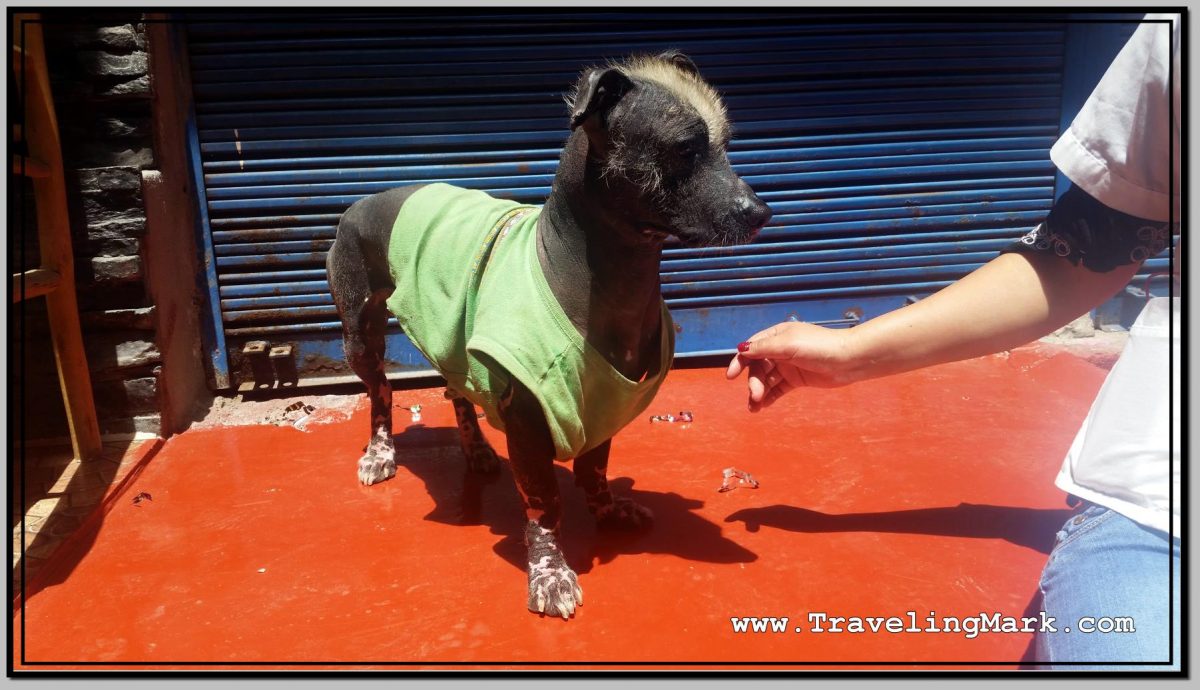 When it comes to the problems with the overpopulation of street dogs, pretty much every third world country I have visited has it. Including Peru. Many street dogs one encounters while roaming the third world are sickly, with various skin conditions. But when it comes to the Peruvian Hairless Dog, the loss of his hair as he ages is natural and not a sign of a disease.

Just as there are many theories about the settlement of America, there are many other hypotheses about the appearance of the hairless dog in Peru. Some historians say that they accompanied the man when he passed through the Behring Strait and others say that it was introduced in later times by Chinese settlers who arrived at the time of President Ramón Castilla (half of the 19th century).

There is however evidence of the presence of hairless dogs since there is culture in Peru. Images on ancient pottery found in Peru suggests cultures as old as Chavin (800 BC), Moche (600 AD), Wari (700 AD), Vicus (300 AD), Chimu (1100 AD), Chancay (1100 AD) and Inca (1450 AD) lived with hairless dogs in their company. Whereas the motifs involving hairless dogs show the animals in everyday situations, including giving birth to puppies and the puppies suckling, it is believed the dogs were mostly considered as pets.

As part of its history it is worth mentioning that in pre-Hispanic times there was a custom of eating dogs in ceremonial acts, in replacement of human flesh, especially in the Huanca culture (central highlands) and it is believed that these dogs were the favorites for the feasts, according to the chroniclers.

In the time of the Incas, the flesh of these dogs was valued for its effects to calm the stomach ache, to warm the feet and to perform magical rituals.

On June 12, 1985 the International Cynological Federation, a Thuin, Belgium based organization which is responsible for the registration or acceptance of new breeds of dogs, recognized and recorded the Hairless Dog of Peru as a breed with the number 310, classifying it in Group V, Spitz type, which are athletic and agile dogs ideal for racing, as well as in section 6, where Primitive type dogs are located. This means that they are pure breeds, ie they do not arise from the mixtures of other breeds like the buldog or poodle, but nature made them as they are, not having varied their morphological characteristics in thousands of years.

The Peruvian Hairless Dog was officially recognized as National Heritage of Peru by the Congress of the Republic on October 22, 2001 and is recognized as a race originating in Peru, through decree law No. 27537. It is also known as El Viringo Peruano, Calato Dog, Chimú Dog, Peruvian Inca Orchid, or Viringo.

Due to the lack of hair, this breed keeps his body warmer to protect himself from the environment, which has been the basis for attributing medicinal properties to the dog – for example to relieve rheumatism.

Because the Peruvian Hairless Dog has no hair, it is also said to be suitable for people with allergies, bronchial problems and asthma. The lack of hair also means it has no fleas nor ticks, since these have nowhere to nest.

My first encounter with the Peruvian Hairless Dog was in Aguas Calientes, where locals appear to have them on display for all visiting tourists to see. I have come across a number of them during my subsequent travels through Peru and have often seen them dressed up in dog suits in order to protect their skin from sunburn. They have always been peaceful and friendly. I think they’d make for a great companion for a person looking for a non-aggressive companion to their home.