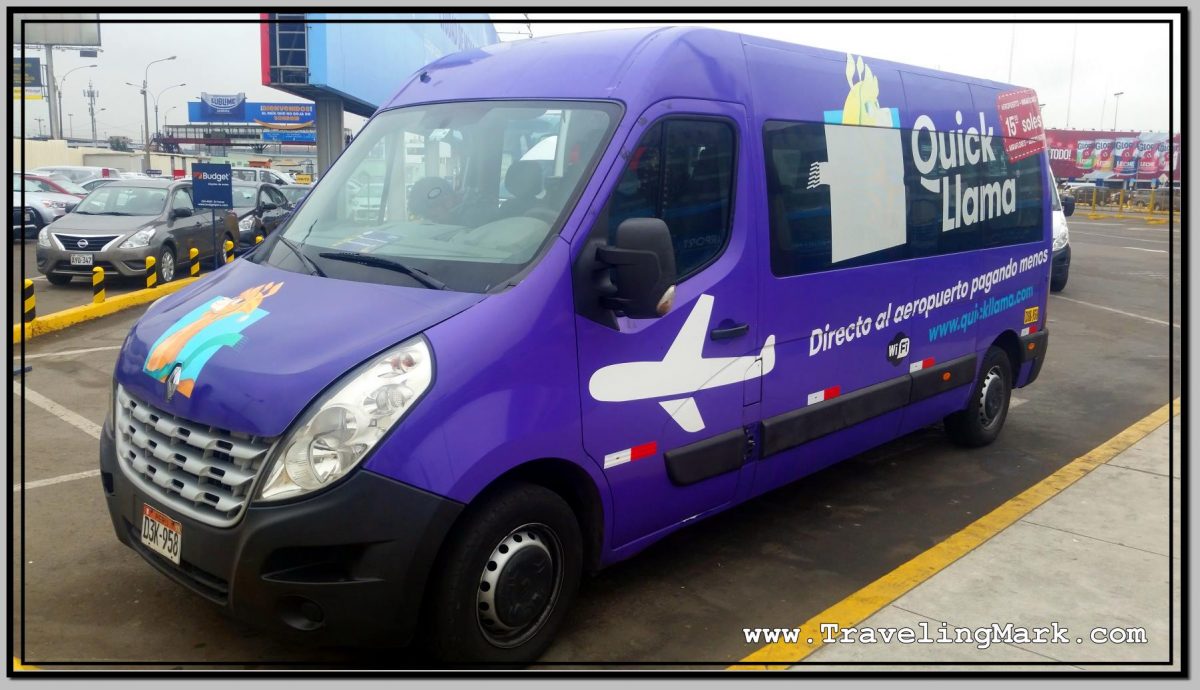 After arriving in Peru’s Lima, I wanted to stay in the area of the city called Miraflores, because it’s known for being one of the safest and has numerous tourist facilities, including hostels.

I found out beforehand that a company names Airport Express Lima has regular services between the airport and Miraflores, precisely because Miraflores is popular with tourists. I however also found out that a smaller company called Quick LLama also offers transportation from the Jorge Chavez International Airport to Miraflores, and unlike the former, which costs 25 Soles, the trip with Quick Llama costs only 15 Soles.

However because Airport Express has a stronger hold on the market, it is far better advertised, so a tourist arriving in Lima will know right away where to find them. There are no indications at the airport that Quick Llama even provides that service, so one simply has to know about them in order to seek them out.

Nevertheless, both companies depart from the same parking lot, which is located behind the Costa del Sol Wyndham Hotel. To get there, walk out of the airport, and you will see the hotel right in front of you, on the opposite side of the road passing by the entrance. Walk around the hotel to find the parking lot behind it. Airport Express bus will likely already be parked in the most prominent location there, and will have a small booth set up where one can buy a ticket.

Quick Llama doesn’t have buses, but rather vans. The vans have large stickers on sides, so they can be easily identified. If there is one already waiting for passengers, it will likely be parked more in the back of the parking lot.

When I got to the parking lot, it was already 7:15 am. There was no Quick Llama vehicle, but Airport Express already had their bus waiting. I asked the staff at the booth at what time it leaves, and was told the next one leaves at 8am. Whereas I had enough time, I went back to the airport and returned to the parking lot in 15 minutes. By that time, a Quick Llama van was already there. I spoke with the driver who told me they were leaving at 7:45 (15 minutes before Airport Express), and confirmed their ticket to Miraflores indeed cost 15 Soles, which was 10 less than Airport Express.

I boarded their van and waited until it departed. There were only 3 more people in the van, so even though far from full, the van left when scheduled – precisely at 7:45.

Despite seemingly long lasting journey, the Quick Llama van got us all to Miraflores safely, and given the mad traffic situation, as fast as could be. I would use them again, and would not hesitate recommending their services to visitors arriving in Lima.